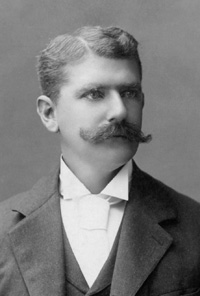 Louis F. Anderson was in many ways a pioneer, but what mattered to him was perpetuating tradition.

Teaching on the western frontier in the early 1880s, Louis sought to instill in the young his own fierce passion for the classics. He became a professor of classics by following his father’s footsteps: Alexander J. Anderson brought the family from Illinois to Oregon, then to Washington’s Territorial University (now the University of Washington), where Alexander taught and Louis studied. Eventually they came to Whitman, where President Alexander set up a new charter, transforming the institution from a seminary to a four-year, degree-granting college.

“I have stood at my window in the highest story of the Hotel d’Angleterre looking upon its wonderful splendour, the Acropolis in front of me crowned with its treasures, beyond which lies the bay gleaming and sparkling in the setting sun. Upon the left stretches out the lionlike mountain, Hymettus. Every evening after the sun is down you will turn and look again upon its purple, violet glow. It looks like a friendly spirit, as though it would tell its tales of ancient glory, if you would only listen.”
— Louis F. Anderson, from his 1887-1931 travel accounts

Louis lived at a strange junction of past and present, change and tradition, and his life was one of contradictions.

He scrambled wildly around precipices — nearly losing his life on a treacherous trek on Mount Rainier — but also stood in solemn reverence of the Acropolis.

He traveled constantly, from Athens to Florence, Memphis to Cairo, but believed in the permanence of things, applying his passion for the past to the vision for the future that his family was charting.

“Are Mount Hood or Mount Rainier less majestic because they have existed through the lapse of age?” he asked in a 1936 speech to the Classical Association of Pacific States.

The enduring nature of Latin and Greek must have been all the more majestic to Louis from the perspective of his own tumultuous era.

As he looked out at his advanced Greek students, gathered for class at the family home — now the Baker Faculty Center — could anything have seemed more relevant than passing on to the next generation a language and literature that had withstood the ages?

“Through the study of Latin,” wrote Louis, “we know our own English tongue better.”

Editor’s Note: Information gleaned from the Whitman College and Northwest Archives. Photos courtesy of the archives.