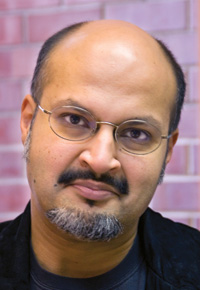 For Gaurav Majumdar, assistant professor of English, playing with language can mean challenging an empire. Majumdar finds that one of the most powerful ways to criticize colonialism is not outright dissent but a subtler subversion in aesthetics.

"People think of aesthetics as some kind of isolated ... artistic, apolitical thing," Majumdar said. "But what James Joyce, Salman Rushdie and Satyajit Ray make clear is that aesthetics also is political."

This trio of artists is the focus of Majumdar’s recent book, "Migrant Form: Modernist Play and Anti-Colonial Aesthetics in Joyce, Rushdie, and Ray," released worldwide in February 2010 by the Peter Lang Publishing Group of Germany. In particular, Majumdar examines Joyce’s "Ulysses" and "Finnegans Wake," Rushdie’s "Midnight’s Children" and "The Satanic Verses," and Ray’s films "The Lonely Wife" and "The Stranger."

Majumdar found these texts to be a stark contrast to the traditional colonial narrative. "Colonial practices often came with the demand for clear, conformist, simple language that made information easily available for colonial understanding," he said. 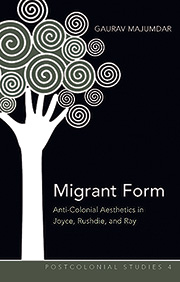 The "migrant forms" that Majumdar studied, however, knew no such boundaries. These included forms that are partial, ambiguous and mixed. For Joyce, one form of dissent was allowing parts of the body to act independently from their characters. In "Ulysses," for example, Joyce distinguishes between "Miss voice of Kennedy" and "Miss gaze of Kennedy." The idea of a centralized consciousness that owns the rest of the body is one of the assumptions of English grammar. By challenging the central authority of the human body, Joyce challenges the authority of the body politic.

Majumdar began to study aesthetics eight years ago in his doctoral dissertation at New York University. At Whitman, Majumdar was able to expand and refine this work — with the help of Rushdie himself. During Rushdie’s 2007 campus appearance, he visited Majumdar’s apartment, where they discussed "a few problematic moments in ’Midnight’s Children.’ Rushdie’s throwaway comments helped clarify some aesthetic problems for me," Majumdar said.

In particular, Majumdar recalls Rushdie paraphrasing Holocaust survivor and writer Primo Levi. "When you are depicting atrocity, after a while, numbers don’t matter. Realist precision and exactitude don’t matter. What will probably shock your reader into more sympathy is the use of ... an aesthetic that the reader will not expect."

In Rushdie’s work, the unexpected comes in the form of an "exuberant" humor in the portrayal of serious matters, Majumdar said. These lighter forms are a way into a more complex reality.

"For many modernists, how you represent things is how you see them," Majumdar said. "What is not recognized is that form is, by itself, a political thing."

Gaurav Majumdar is the 2008 recipient of the Dublin Award for the Study of Global Multiculturalism at Whitman. His book is available at the Whitman Bookstore at (509) 527-5274.