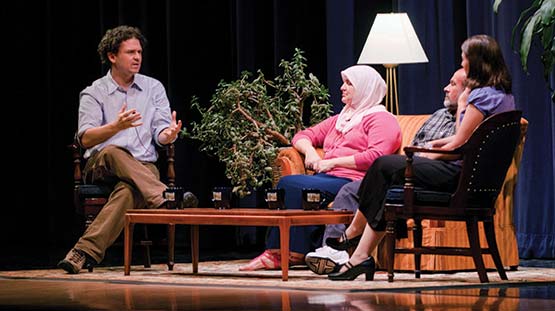 These speakers represent the spectrum of national figures who lectured on campus and interacted with students in the classroom this fall.

Dave Eggers, above left, author of "Zeitoun," joined the book’s subjects, Kathy and Abdulrahman Zeitoun (seated on the couch), in discussing the book before a packed house at Cordiner Hall in September. During the discussion Eggers remarked, "What’s so great about a school like Whitman is that it emphasizes global thinking." The discussion was moderated by Josie Hendrickson (above, right), assistant professor of religion. (See her comments in Great Winter Reads.) Eggers also spent an hour with students in a "Social Problems" sociology course.

Magnus Isacsson, independent documentary filmmaker who has produced more than a dozen independent films, presented a two-week course titled "Hot Docs! Documentary and Public Debate" as well as a public lecture during his visit to campus in October.