Breaks in the Chain 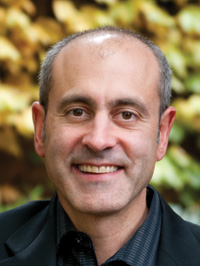 In 1999, 1,400 immigrant meatpacking workers walked out of an IBP Inc. beef plant in Pasco, Washington, and didn’t come back for six weeks. It was the largest strike in the meatpacking industry in 25 years. The news reached all over the country, catching the attention of The New York Times and The Washington Post, and sparking smaller strikes in Texas and Colorado.

The workers who waged the wildcat strike soon took control of their local union, Teamsters Local 556. As this labor movement grew, so too did the interest of Associate Professor of Politics Paul Apostolidis, teaching 38 miles to the east at Whitman College.

"I realized this was a really interesting opportunity not only to investigate labor action as such but also to talk about the relationship between immigration experiences and political activation," Apostolidis said. "With a keen ethic of democratic participation, the workers fought to change dangerous working conditions and unfair treatment at the factory — and to advocate for immigrants’ rights."

Spurred by these local events, Apostolidis began nearly a decade of community research and academic inquiry, culminating in the book, "Breaks in the Chain: What Immigrant Workers Can Teach America about Democracy," published by the University of Minnesota Press in August 2010.

Heralded as "tremendously important and timely" by Lisa Disch, a leading political theorist at the University of Michigan, the book sold out at an American Political Science Association conference held in September in Washington, D.C. 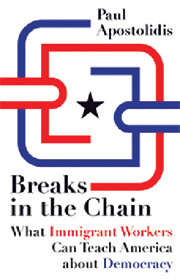 Apostolidis’ book draws not only from his own perceptions but also from collaborative work with Whitman student research assistants to hear immigrant workers’ own accounts of their experiences.

"I’m not a social scientist who goes out and merely collects facts. I’m most interested in studying how people who are involved in social movements frame the issues, and how they understand the types of power they confront," he said.

Indeed, much of the material for this book stems from 30 interviews conducted in 2002 by Apostolidis and student Paola Vizcaino Suárez ’04 with workers who were members of Local 556.

"We never got tired of hearing people’s personal stories."

"We’d go out to Pasco, usually to the public library, sometimes to the person’s home, and talk to the individual for close to two hours, after a prior meeting when we’d meet them for 30-45 minutes just to get acquainted. We’d do two or three full interviews on a given day, and then we’d spend the whole trip back to Walla Walla processing aloud what we had just heard. And we never got tired of hearing people’s personal stories." Paola later transcribed all the interviews. "It took a long time to process and interpret this mountain of material," Apostolidis said.

For Apostolidis, the interviews provided startling and clear evidence of the ways immigrant workers actively help create American politics and society, rather than simply being links in the "chain," a reference to "the high-speed mechanical apparatus that transports giant hunks of cattle carcass from work station to work station." It makes meatpacking the most dangerous job in the United States.

"Breaks in the Chain" has implications for immigration policy reform, too, according to Apostolidis. "This book indicates that it doesn’t make sense to think about undocumented immigrants in simple, abstract terms as ’lawbreakers.’ You have to look at the social reality: the work they do every day, their role in the local community and the lessons all of us can learn from immigrants’ political efforts."

Paul Apostolidis holds the Judge and Mrs. Timothy A. Paul Chair of Political Science. He is the author of "Stations of the Cross: Adorno and Christian Right Radio" and co-editor of "Public Affairs: Politics in the Age of Sex Scandals," as well as the founder of the community-based undergraduate research project on "The State of the State for Washington Latinos," which has issued annual reports since 2005 (www.walatinos.org). His books are available at the Whitman Bookstore at (509) 527-5274.