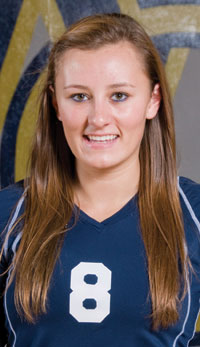 Jillian Davis ’14 netted high honors this fall when she was named the American Volleyball Coaches Association’s NCAA Division III West Region Freshman of the Year. In addition to her regional honors, Davis was the only first-year player to make the All-Northwest Conference (NWC) First Team after leading the conference in total kills and finishing among the leaders in digs. She also was named NWC Student Athlete of the Week for volleyball in early November. Courtney Brewer ’13 earned All-NWC Honorable Mention recognition.

After missing much of her first soccer season to injury a year ago, Erin Flannery ’13 was voted to the All-NWC Second Team. Marisa Poorboy ’13 and Julianne Masser ’13, Whitman’s two leading scorers, received Honorable Mention recognition for a young Missionary team. Masser also was voted to ESPN The Magazine’s Academic All-District Third Team.

Kristen Ballinger ’11 and Emilie Gilbert ’13 earned All-NWC Second-Team honors after placing eighth and 10th at the conference championships in late October. For Ballinger, who transferred to Whitman as a sophomore, it was her third straight Top-10 performance at the conference finals. Ballinger also placed 11th at the West Region finals in mid-November to earn her third-straight trip to the NCAA Division III National Championships in Waverly, Iowa, where she placed 139th in a field of 279 runners. Both Ballinger and Gilbert also earned spots on the All-Region Team.

Whitman is partnering with an Internet provider to offer live video stream of all home men’s and women’s basketball games. Viewers can pay for one basketball game or to see all games for one team. Webcasts began with home volleyball matches and will continue in the spring with home baseball games. Fall 2010 volleyball matches are available to view through the on-demand feature. For details, see the Whitman Portal at Game Central.