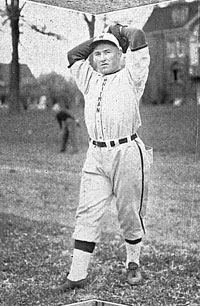 Their athletic experiences range from baseball in the 1930s, golf in the 1960s and track and field in the 1970s to volleyball and soccer in the 1980s, but the five former greats inducted into the Whitman College 2010 Athletics Hall of Fame this fall were bound by one common thread. All five were Northwest Conference (NWC) champions, either individually or as part of a team.

The late Wilfred "Pete" Jonas ’38, who capped his senior baseball season by pitching Whitman to its third conference title in four years, died in 2005 at age 89 in Spokane after a long career as an optometrist. After Whitman, Jonas played several seasons for the Seattle Rainiers and other minor league clubs.

The four living members of the new Hall of Fame class were inducted at a September 2010 ceremony in the Sherwood Athletic Center Hall of Fame foyer:

Del Rankin ’70, a four-time All-NWC golfer, helped Whitman win four straight team titles. His best individual performance came in 1969 at the Tualatin Country Club near Portland, where he captured medalist honors and led Whitman to a 24-stroke victory over its nearest competitor. After graduation, Rankin was a PGA club professional, then returned to Yakima, Washington, to join his father’s business. After retirement in 2001, he rejoined the PGA as a teaching professional and helped form a local chapter of The First Tee, a youth character development program. He serves as the chapter’s executive program director. Rankin and his wife, Sara Wynn Rankin ’70, live in Yakima. They have two sons.

John Leier ’74, a two-time NWC champion in the 880-yard run, placed sixth at nationals as a junior in 1973 and was third as a senior in 1974. He clocked a time of 1:49.7 at the 1974 meet, beating Kenya’s Michael Boit, a bronze medalist at the 1972 Olympics, in the process. He also holds or shares Whitman school records in the 800 meters and sprint medley relay. He is an environmental resources specialist with the U.S. Army Corps of Engineers in Walla Walla. He and his wife, Karen Leier, have four children.

Kristin Richel Goodwin ’88, a three-time All-NWC volleyball player, was part of Whitman’s 1984 Women’s Conference of Independent Colleges (the precursor to NWC) championship squad. During the summer after her first year at Whitman, Goodwin was named to a Northwest traveling team that played matches in England, Scotland and Wales. She ran track for Whitman and still shares the school record for the two-mile relay with three teammates. After graduation, Goodwin coached high school volleyball and basketball for a few years before earning a master’s degree in physical therapy and practicing for more than 10 years. She and her husband, Tom Goodwin, an orthopedic surgeon, have three sons. They live in Eagle, Idaho.

Keri Hall Greenheck ’88, a four-time all-conference soccer player who shared in a 1984 championship, still holds the single-season and career scoring records for women’s soccer at Whitman. Records are incomplete, but she finished her Whitman career with more than 70 goals. After Whitman, Greenheck earned her law degree and worked as an attorney in both the San Diego and Seattle areas. She and her husband, Dave Greenheck, have two sons and a daughter. They live in Sammamish, Washington.