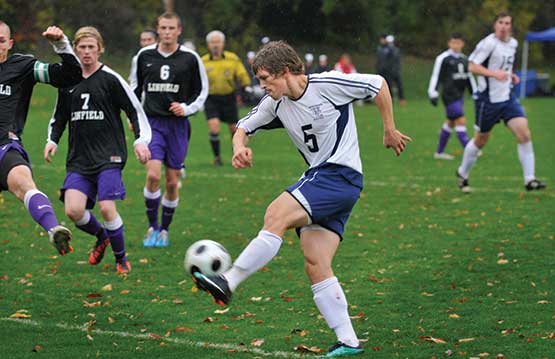 For the second time in three seasons, Coach Mike Washington and the men’s soccer team came within a game of winning a Northwest Conference (NWC) title this fall. Whitman beat Whitworth University on the last day of the season to jump from third to second in the final standings. Pacific University also won its last game, which is all that kept Whitman from grabbing a share of the NWC title.

The Whitman men finished their season with a school-record six straight wins. The Missionaries collected seven wins and one overtime tie in their last eight games. 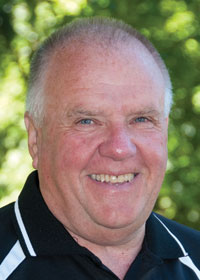 Washington, now in his 13th year at the helm of the men’s program, was named NWC Coach of the Year by his colleagues in post-season voting.

Washington, a native of England, came to the United States in 1981 after having played and coached in the highly competitive British club ranks. Before coming to Whitman, he coached at Bellevue Community College and high schools in the Puget Sound area. He also spent two years as director of coaching for the Northshore Youth Soccer Association (based in Woodinville, Washington), which had responsibility at the time for 1,000 coaches and 6,000 players ranging in age from 6 to 18 years.

Washington has been active for years in the Olympic Development program. In addition to his work at Whitman, he also has coached local youth teams and serves as the boys’ coach at Walla Walla High School.

Since coming to Whitman, Washington has organized and led his team on two-week summer tours of England. This past summer his squad went undefeated against British club teams, notching four wins and a tie.

"Mike has been producing outstanding soccer teams for years now, and it’s nice to see him be recognized by his peers in the coaching community," Whitman Athletic Director Dean Snider said.