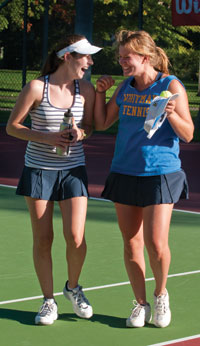 Alyssa Roberg ’13, left, and Elise Otto ’11 celebrate their win of the regional doubles title at a tournament held at Whitman in September 2010.

Five players from the Northwest Conference qualified for the USTA/ITA National Small College Tennis Championships in October 2010, and four of those players represented Whitman College.

Elise Otto ’11 and Alyssa Roberg ’13 qualified by winning the regional doubles title at a tournament hosted by Whitman. It was the second doubles crown in three years for Otto, who also won in 2008 with partner Katie Oost ’09.

In the singles semifinals of the latest tournament, Roberg dropped a close three-set decision to the eventual singles champion from Willamette University.

At the regional men’s tournament, which Willamette hosted, Conor Holton-Burke ’12 and Andrew La Cava ’14 put the finishing touch on another dominating performance by the Whitman men’s team. After Holton-Burke and La Cava beat Whitman teammates Chris Bailey ’11 and Sam Sadeghi ’13 for the doubles title, La Cava edged Holton-Burke in two sets for the singles title.

La Cava’s victory in singles marked the fifth straight year that a Whitman player has won the singles title at the regional tournament. And when La Cava and Holton-Burke won the doubles title, it was the fourth time in five years that Whitman players had ruled that portion of the tournament.