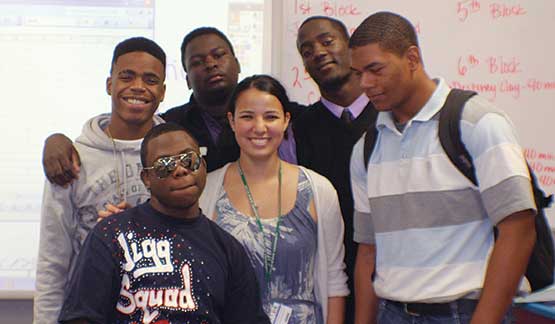 Miyoko Patricelli ’10 is surrounded by the students she works with through the Teach for America program in Mississippi. Patricelli, from Eugene, Ore., graduated with a degree in sociology.

For Miyoko Patricelli ’10, it began with a handful of medical forms and a bewildered 19-year-old young man. She was a Whitman student volunteering at Walla Walla Helpline, and he was trying to obtain money for a doctor’s prescription he could not afford. As he struggled to write his own name and his own birthday, Patricelli knew she had to change something.

She wasted no time after her 2010 graduation, catapulting herself this fall into a full-time teaching position with underprivileged students in the Mississippi Delta. For the next two years, Patricelli will work as one of Teach for America’s (TFA) 8,200 corps members, who are placed in 39 regions around the country. TFA is a national organization that "aims to eliminate educational inequity" by harnessing the talents of recent college graduates in teaching positions in low-income public schools.

Of the 46,000 applicants nationwide, only 4,500 members were accepted to join TFA’s 2010 corps of teachers. Ten Whitman alumni were accepted this year, placing Whitman at No. 13 nationally among small colleges and universities to contribute graduating seniors to the program.

"It felt fantastic to be back on campus," he said. "I was so impressed with how little things had changed in terms of Whitman’s amazing caliber of students."

TFA looks for seven key qualities in incoming teachers, most notably a demonstrated aptitude for leadership. But above all, Fitzpatrick said, the common theme among corps members is a spirit of activism. "We want people who believe that all children deserve an equal education; we want people who are willing to work hard for social justice."

For Connor Guy ’10, Teach for America was an ideal opportunity.

"I was looking for something in service. I wanted to give back," said Guy, who now teaches in a middle school in Las Vegas. He believes TFA is the "perfect post-grad plan for any Whitman student. It’s a chance to help others, receive a salary straight out of college and immediately put your college degree to use." And Guy strongly believes that Whitman’s academic intensity is the ideal preparation for the rigors of teaching.

Patricelli agrees the TFA program is demanding but emphasizes how much it gives back to her and to her students.

"Teach for America is the most challenging adventure I have ever undertaken. It requires late nights and very early mornings, but when Phillip understands how to successfully perform horizontal stretches of functions by a factor of three, and when another of my students can repeatedly tell me that an expression is not simplified because there is a square root in the denominator — something she could not have told me an hour ago — it reaffirms why I’m a teacher," Patricelli said.