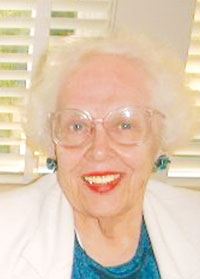 Lucile E. Rempel died Oct. 4, 2010, at her Walla Walla home. She was the wife of the late Arthur "Art" Rempel, beloved longtime Whitman biology professor. Lucile Rempel was born in Upland, California, on Sept. 4, 1912, the daughter of Herman and Mollie Sommerfield. She graduated from Chaffey High School in Ontario, California, and in 1934 from Oberlin College in Ohio. She moved to Walla Walla with her husband in 1938.

"Over the next five decades, the Rempels entertained untold numbers of students, faculty, staff and community members in their home," said Delbert Hutchison, associate professor of biology. "Lucile was indefatigable in her interest in all of us, wanting to know how we were doing, what we were studying, what we thought of current events. She was a remarkable person, and we are all better for having known her."

In 1966, she received her master’s degree from the University of Washington. She had worked in California for the State Relief Administration and in Washington for the Department of Social and Health Services. She also worked with families in private practice.

She served on the boards of AAUW, the Walla Walla Mental Health Center and the National Organization for Women. She volunteered at the YWCA and taught church school at the First Congregational Church, where she was an active member for more than 70 years. She helped organize a local group for German folk dancing. She was well traveled and had collected dolls from all over the world. She was preceded in death by her husband in 2007; by two sons, Robert and Paul Rempel; and by her sister and brother, Mildred and Leonard Sommerfield. She is survived by sons Herbert and Roland and a daughter, Margaret Cook.