A head for business 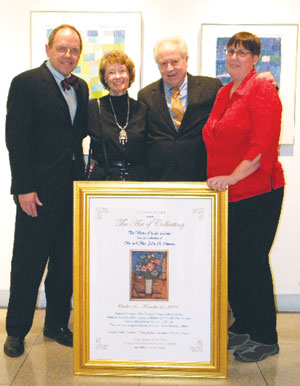 President George Bridges, left, with Janet and John ’54 Peterson and Dawn Forbes ’93, director of the Sheehan Gallery, at the opening of an exhibit of the Petersons’ collection of paintings.

As a young couple, John ’54 and Janet Peterson explored some of the most renowned museums of the world. First, in Germany and France, while John served as a finance officer in the Army, and later in Manhattan, where they lived a short time after his service ended.

John graduated from Whitman with a bachelor’s degree in economics and earned a master’s degree in business administration from Harvard University on his way to a career in business. But it was through those many museum visits that he and his wife developed their mutual passion for art, a passion they have shared with the Whitman community over the years.

After New York, the Petersons moved to San Francisco, where John began his longtime career in investment management. While living in Northern California, they visited the Laky Gallery in Carmel in 1964. A "small oil painting of colorful anemones in a ceramic vase" caught the couple’s attention. They couldn’t have imagined then that the piece, "natur morte aux fleur" (still life with flowers), would become the cornerstone of their significant historical collection of the work of Hungarian painter Emile Lahner.

"We were drawn to his paintings, especially the way he used color. It spoke to us," John said.

In 1974, the Petersons helped the Carmel gallery owner finance a major purchase of Lahner’s work, pieces the artist had not before made available for sale. Lahner was born in 1893, and lived and painted in Paris for nearly his whole life. "He moved in the same circles as the other great painters of the School of Paris," said John. "As Emile was getting older, he needed the financial support" from the sale of his remaining paintings. The Petersons, who already owned nearly a dozen, were happy to oblige.

The Petersons left the Bay Area in 1977 for Spokane, and a new life for their family: Two of their three children, Claire Peterson ’82 and Robb Peterson ’86, attended Whitman, while son John attended Gonzaga University. Once in Spokane, their father launched his own company, Peterson Investment Management Inc., which is now the oldest privately established investment management firm in that city. Patrons view the works of Emile Lahner at "The Art of Collecting" exhibit at Sheehan Gallery in fall 2009.

A year after the move to the Northwest, the Petersons loaned pieces of the Lahner collection to Whitman’s Sheehan Gallery for part of a larger exhibit, "Ecole de Paris" (School of Paris). In fall 2009, the couple’s collection returned to Sheehan for its own show, "The Art of Collecting."

"It was special to bring it back 30 years later," said Sheehan Director Daniel Forbes ’93. "A whole different audience could see the works and the ways in which their collection continued to grow.

"This show was immensely valuable on a number of different levels," Forbes said. "It is an extensive collection that reflects how the artist was influenced by culture and historical events. The exhibit included artistic styles from modernism and primitivism to abstract. Lahner was responding to the major modern art events happening around him."

In addition, Forbes said the show directly benefited French students, who put their scholarly study into practice, translating labels and other documents for the exhibit.

For the Petersons, exhibiting the collection of paintings was "an opening of our eyes and a treat to be able to see basically the life’s work of an artist, how it developed and how it changed.

"We were pleased to be able to show this collection to the Whitman family and appreciated the fine work of Daniel Forbes and staff."

"We have a tremendous resource in alumni with collections they are gathering on their journeys through the world," Forbes said. "It’s good for people to see that they don’t have to be artists or art history majors to appreciate art. A good liberal arts education allows you to see so much more of the world around you. Sometimes it just takes starting with a single piece to build a tremendous collection."