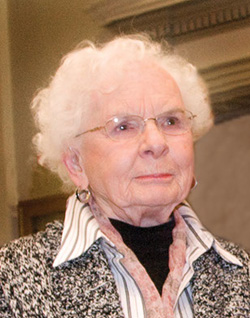 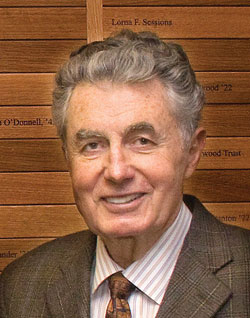 The Stephen B.L. Penrose Society was established last year to recognize those who have given to Whitman College cumulative gifts of $1 million or more over their lifetimes. Their leadership and commitment have helped transform the college from a small, but committed, college of Western renown to a top-tier liberal arts institution of national prominence.

Welty enthusiastically joined her husband, Dr. Robert “Bob” Ford Welty ’35, both prominent physicians in Spokane, in his support of Whitman College during his lifetime, executing a variety of planned gifts and establishing the Dr. Robert Welty/Eva Roberson Scholarship. Although Libby attended Mount Holyoke College, she has adopted Whitman as her own. Continuing her late husband’s service to the college, Libby has volunteered as an overseer and then a trustee for the past 19 years. During her leadership tenure, she expanded their generous support for the college through major gifts to the library, science building and the Welty Health Center, which is named in honor of both Drs. Welty. Libby received an honorary doctor of science degree from Whitman in 1994.

Young is president of Robert Young & Associates, a real estate investment and development firm. He served the college as an overseer for 15 years from 1976 to 1991. Since that time, Bob has maintained a leadership role and provided support for many key projects for Whitman. He and his wife, Jackie, have given some of the largest gifts of real estate in the history of the college. One of these gifts goes to a professorship in honor of the Class of 1955’s 50th reunion. In addition, the Youngs’ leadership gifts to the Reid Campus Center made possible the Young Ballroom and Stevens Gallery, and helped bring a wonderful gathering and celebration space to the college’s students and community. Bob received an honorary doctor of public service degree from Whitman in 2006.

The co-chairs join the college in recognizing three new Penrose Society members for 2008-2009:

Bill Perry, a political science major at Whitman, went on to a successful career in business management and real estate in Hawaii. He has given loyal annual gifts for more than 35 years, including a series of unitrust gifts over the last 20 years that will create a significant legacy for future students. Many staff and faculty have come to know him well, having had the privilege of spending time with him during his visits to campus for the 50-Plus Reunion and Summer College over the last 15 years. Perry was recognized as a new member of the Stephen B.L. Penrose Society in June during a Summer College dinner at the home of President George Bridges and Kari Tupper.

When Mary Eleanor Mitchell died in January of 2007, Whitman learned that she had made a large bequest to the college to benefit the fine arts. Her parents, Donald P. and Leowna Lowe Mitchell, had attended Whitman in the early 1900s and were the inspiration for her legacy gift.

A native of Tacoma, Wash., Sara Lloyd Pekarsky majored in English at Whitman and went on to serve in the U.S. Navy for more than 20 years. There she met her husband, Abraham “Pek” Pekarsky, also a naval officer. The Pekarskys later retired to Prunedale, Calif., and were loyal supporters of Whitman over the years. Sara was a longtime class representative, and in 2001, they established the Pekarsky Scholarship to aid sophomore, junior or senior Jewish students with financial need. After Sara’s death in 2003 and Pek’s in 2008, Whitman received a bequest to create an additional endowment to support students.