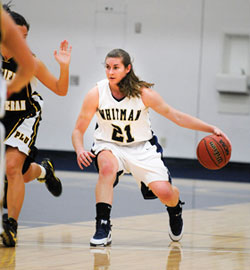 “We are striving toward the model where excellent students also are outstanding athletes, and they compete with the best that the NCAA Div. III has to offer. The W Club is helping make that happen,” said Dean Snider, athletics director.

Alumni and friends of Whitman College and its athletics program have stepped forward to create the W Club, a group dedicated to providing the best experience for student athletes and supporting the efforts of the coaches and staff as they continue to expand and improve the program.

“Our goal is to build athletic programs that mirror the excellence that Whitman College has long provided in the academic realm,” Snider said. “The W Club is making a significant impact in this effort, generating enthusiasm and alumni fan support while bestowing an additional financial boost that is critically important to all of our varsity programs.”

The club partnered with the alumni office to host the Alumni-Student Softball Game this summer in Seattle and organized its first golf tournament at Wine Valley Golf Club during fall reunion weekend. The club also hosted tailgate parties to rally alumni and fans for Whitman teams as they played road games in the Puget Sound and Portland areas.

“Having the fan support from the W Club at an away game last year gave us an extra boost to play well,” said Whitman basketball player Hilary White ’10, a music major and pre-med student.

An impressive 575 alumni and friends joined the W Club in 2008-2009. Many club supporters were once Whitman student athletes themselves. They now work to enhance the spirit of athletics on campus, ensuring that current and future Whitman students have the opportunity to compete inside the classroom and out.