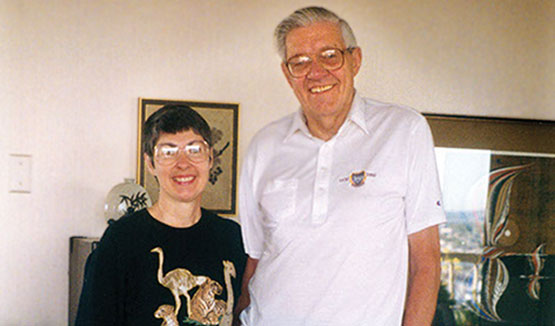 Janet Pitts Beckmann has established two endowments to honor the memories of her husband, George Beckmann, above right, and her parents, Jack Coleman Pitts and Dorothy De Simone Pitts.

Why did four family members who had no connection to Whitman College choose to create two endowments here?

Because a quality liberal arts education is everything, said Janet Pitts Beckmann, the daughter who has made the family’s plan to fund study abroad and library acquisitions a reality. The importance of a liberal arts education is the thread that runs through the life stories of her mother and father, Jack Coleman Pitts and Dorothy De Simone Pitts, as well as her own story and that of her late husband, George Beckmann.

Janet’s father, Jack Coleman Pitts, longed for an education. It was a rocky journey: When he was 5 years old, his mother died in the influenza pandemic; he had to leave school for a year at age 13 to run the farm for his ailing father; and during the Great Depression he lived with his grandfather and worked in a peach orchard so he could attend high school. Throughout these trials, Jack Pitts was an excellent student and natural leader. Despite the challenges of the Great Depression, he longed for an education and eventually graduated at the top of his flight-training program at the University of Chattanooga. He went on to become the operations manager of the program that trained hundreds of pilots each month during World War II. After the war, he was in the first pilot group to be jet-engine-qualified for commercial aviation, and he flew for National Airlines. At the end of his career, he led the effort to establish pilots’ retirement benefits and was a founder of national and international retired pilots’ organizations.

Janet’s mother, Dorothy De Simone, was born in 1920 in Cleveland, Ohio. Dorothy’s father, a Presbyterian minister, impressed upon his three children the importance of attending college. Dorothy would graduate in 1941 with a biology degree from a small liberal arts college, Tusculum College, and go on to teach high school biology. Throughout her life she told of her love for her college years and emphasized the importance of her liberal arts education. 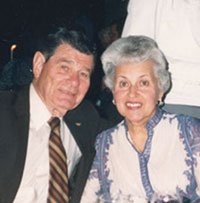 With parents for whom an education was everything, going to college was a given for Janet. Although she remembers being told by a high school counselor that she wasn’t college material, she persevered. With a strong interest in science, she enrolled in the University of Miami expecting to spend much of her time in a chemistry lab. But the university had other plans — requiring its freshman students to participate in a two-year liberal arts program. “It changed my life,” she said.

“It changed how I thought, introduced me to so many wonderful things,” she said. A liberal arts education taught her “how to think, to analyze things.” She made the dean’s list, and went on to graduate magna cum laude with a bachelor’s degree in science, then a master’s from Emory University and a doctor of philosophy from the University of Washington. She became the associate dean for graduate and continuing education at the University of Miami School of Nursing and later served as dean of the school of nursing at the University of Alabama in Huntsville. She was the youngest dean in the nation at the time at age 31.

Janet’s late husband, George Beckmann, was a 1-year-old in New York City when his father died, and his mom had to go to work. Education was everything in his family as well. Young Beckmann would go on to earn a scholarship to Harvard for undergraduate studies. After he earned a doctorate from Stanford University, he was chosen as a Fulbright Scholar and Ford Foundation Foreign Fellow in Japan.

Eventually, he became an internationally known scholar in Japanese modernization and radical politics. Academic posts included Harvard, Stanford, University of Kansas, Claremont College and the University of Washington, where he spent the bulk of his academic career.

He came to UW to be a professor of East Asian studies and director of the Far Eastern and Russian Institute. But in short order, he was offered and accepted the position of dean of the university’s largest academic division, the College of Arts and Sciences. After much success in that position, he accepted the position as provost, “where among other things the library and liberal arts remained close to his heart,” Janet said.

Belief in a high-quality liberal arts education — that’s why this family with no previous connection to Whitman established two endowments at the college. After studying other colleges throughout the country, the two academics, Janet and George, honed in on Whitman, Janet said. They created the George M. and Janet Pitts Beckmann Endowment to support study abroad and library acquisitions, which will be funded with a gift from their estate.

“Whitman is exactly what I dreamed of in a school to support,” said Janet, who is now retired but still works occasionally as a Seattle-based consultant on issues of health-care quality. She is the author of nursing malpractice and negligence books.

Her conclusions about Whitman were reaffirmed when she attended Summer College this year, taking courses from faculty and learning about the campus. “The professors were absolutely top-notch. I look forward to coming back again and again.”

As Janet researched Whitman and worked with staff to structure her gift, her mother also developed great respect for the college. After Dorothy’s death in 2007, Janet, acting on her mother’s intention, established a second endowment from the proceeds of her mother’s estate. The Jack Coleman Pitts and Dorothy De Simone Pitts Endowment, which also funds study abroad and library acquisitions, will begin helping students and building resources in the near future.

“My parents were always giving and thinking about others. Their strong influence guided the course of my life and career,” Janet said. “They taught me the joy of humor, the importance of planning, the worth of education, the wonder of adventure, the magic of philanthropy, the importance of reading, the rewards of hard work and the delight of the humanities, among other things,” she said.

“We believe that a liberal arts education is the foundation for being able to function in and contribute to society.” 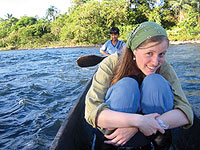 The study abroad portion of both endowments will benefit students in the humanities “who are linguistically qualified to enroll in courses at a foreign university where English is not the language of instruction.” Janet and her late husband understood the “enriching and important” value of study abroad and wanted to provide students with meaningful experiences, she said.

The library portion of both endowments is designated for acquisitions in Asian studies, religion, and classical Greek and Roman studies. “The library is the heart of the college, and libraries often are forgotten when big gifts are made to colleges and universities,” Janet said.