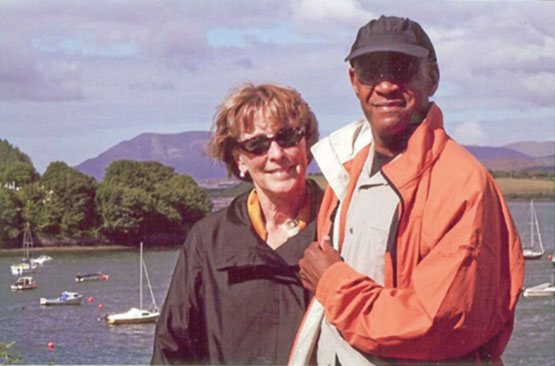 If home is where the heart is, as the ancient proverb goes, Karen “Kari” Glover ’72 is most definitely at home at Whitman, where she was embraced and encouraged after her father’s death at the close of her sophomore year.

“In many ways Whitman became my family for the next few years,” said Glover, who went on to earn her law degree from Harvard. The first female managing partner in her Seattle law firm, she was — at one point in her career — one of only six women managing partners at the 100 largest law firms in the country.

Her career path, she believes, was lit and guided by the insight and support of her Whitman family. Glover has spent the intervening decades returning the favor as a volunteer, overseer and trustee, eventually serving as the first woman trustee chair. Along the way, she has been a cheerleader for prospective students and a mentor to current students.

A combination of her “special fondness for the ability of the college to create a home for its students” and what she has learned as a member and chair of the trustees’ diversity committee over the past decade inspired Glover and her husband, Thaddas Alston, to provide significant support for the new Glover Alston Center. The renovated historic home will be a space for students with diverse backgrounds and interests to explore, reflect, discuss and engage.

“It is clear to me, and really to everyone, that the professional and business world Whitman graduates will experience is likely to be more and more diverse,” said Glover, whose career at Preston Gates & Ellis, and then K&L Gates LLP, included serving as the global integration partner, working to meld two mammoth law firms with a combined 1,400 lawyers and 22 offices around the world.

“I started to think about ways in which Whitman College could stay abreast of those changes, to continue to be a college relevant to the world for the foreseeable future,” she said. She and Alston, an international lawyer and businessman, believe that awareness of globalization and diversity — “in the broadest sense of the word, all kinds of people working together, learning to be together” — is key to that relevance.

The Glover Alston Center has been developed and refined through study and reflection by members of the Whitman community, Glover said. She is pleased that it will be a home-like setting, accessible and welcoming to students of all cultures and backgrounds. “I hope it will be a place where people can come together comfortably and well.”

Mukulu Mweu, associate dean of students for intercultural programs and services and a member of the committee that developed the concept for the center, agrees. “We want the house to be utilized as much as possible by all kinds of groups,” she said. Mweu envisions it as a space for student groups to hold meetings or work together on projects, professors to deliver small-group lectures or host seminar classes, and students to meet with a counselor or watch an international soccer game with new friends. The possibilities are endless, she said, and use of the facility will change from year to year with the ebb and flow of students’ interests and needs.

For Glover, issues of diversity have been a growing area of interest since her marriage to Alston, another Harvard-trained lawyer, whom she met after law school. She describes their family as “a particularly American mixture of ethnic backgrounds. My background is largely Irish and English American, my husband’s is African American. Our two daughters are mixed race. A significant Native American strain runs through our families on both sides.”

To foster at Whitman an increasing awareness of diverse cultures and backgrounds, the couple created the Adam Dublin Award for the Study of Global Multiculturalism in 2003. Awarded annually to a faculty-student research team, it is named to honor their godson, Adam Dublin ’96, who died in his third attempt at a heart transplant. “He had a wonderful life and a short one,” Glover said of Dublin, a vibrant participant in Whitman’s student Jewish group Hillel-Shalom and one of its earliest members.

Glover enticed Dublin and other prospective students to attend the college by telling them about the academically demanding yet thoughtful and encouraging professors she encountered — teachers with “the ability to take in the individual nature and development of their students.”

She might tell a young person about Dr. George Ball, Weyerhaeuser professor emeritus of biblical literature, who handled her father’s memorial service and remains in contact with her.

Or Tom “Tommy” Howells, professor emeritus of English, who taught the works of Joyce, Proust and Eliot in a way that “gave me a lifelong perspective. I sometimes climb out of bed in the middle of the night to find a treasured passage in those college books,” she said, adding that she used what she learned from Howells in managing the law firm.

She credits Robert Fluno, who was the Miles C. Moore professor of political science, and Joseph Maier, professor emeritus of philosophy, with helping her decide to attend law school. “Women didn’t do that commonly in my era,” Glover said. They “continued to pay attention to what I was doing and encourage me” through law school, she said.

After law school, she joined the Preston firm and remained with the firm until the end of 2008, presiding in 2006 over the consideration of the merger that formed K&L Gates. “I looked at the goals we had set in the merger discussions, and I concluded we had achieved them,” she said. “I was ready to explore something else.” Although she’s not yet sure what that “something else” will be, and she doesn’t quite think of herself as retired, she is happy for now to travel with her grown daughters, continue with her civic and volunteer work, and spend time with her “greater family,” which includes her Walla Walla alma mater.

“Volunteering for Whitman is a lifestyle,” Glover said. “I’ve done other volunteer work, civic leadership and corporate leadership, but with Whitman it’s a lifetime learning process.”

And Glover and Alston will continue to help future generations of students from many backgrounds and cultures join the Whitman family: In 1985, to honor her father, they established the Gordon E. Glover Scholarship Endowment.