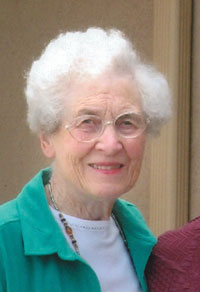 Carolyn Young Treneer ’43 has earned this year’s top spot on the Annual Fund’s roster of volunteers for outstanding achievement. She served as a class representative briefly in the late 1960s and returned last year as the chief volunteer for her class. Through her efforts and the generosity of her classmates, the Class of 1943 achieved an 84.09 percent participation rate and contributed $84,580 to support students and faculty.

When Carolyn learned that her name and achievement would be added to the plaque honoring Annual Fund volunteers, she commented, “I do, however, think that the Class of 1943 should be inscribed on the plaque instead of my name.” Her only request: “a typewritten note saying ‘thank you.’”

Carolyn’s family includes a long legacy of Whitman alumni, including son Chuck Treneer ’71 and granddaughter Stephanie Treneer ’00. Carolyn’s mother, Laura James Young, graduated from Whitman Academy in 1901. Carolyn’s grandfather, who moved to Spokane in the 1800s after he graduated from Middlebury College, was instrumental in instilling the value of a liberal arts education in his family and decided that Laura would attend Whitman.