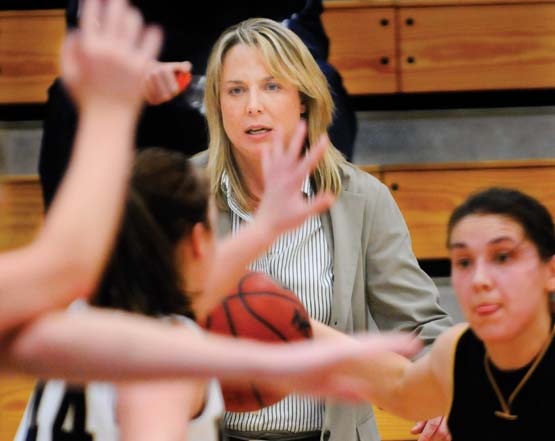 Coaching a varsity sport at a college with a rigorous academic setting is a complicated endeavor.

Just ask women’s basketball coach Michelle Ferenz, who in January celebrated her 100th coaching victory midway through her eighth season at Whitman. Or, ask her boss, Dean Snider, who was the winningest coach in the history of Whitman volleyball before stepping into the role of athletics director a few years ago. 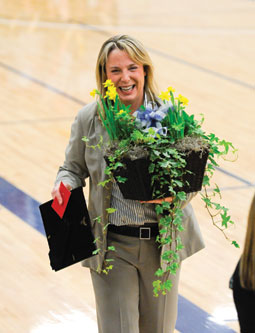 Jeff Northam ’88, now in his 15th season as the men’s tennis coach, reached the 100-victory plateau some years ago and could hit 200 wins as early as next spring. Scott Shields ’91, who coaches the women’s soccer team, also has passed the 100-win mark.

Dean Snider, athletics director, relinquished his coaching duties with the women’s volleyball team after the 2005-06 season, but not before having accumulated more than 200 wins. Skip Molitor had 100-plus victories to his credit with the men’s basketball team before moving into his current role as assistant athletics director.

“It takes focus and hard work to be successful in this conference, which is strong from top to bottom, and no one outworks Michelle,” Snider said. “She is

very demanding of her players. She sets high expectations in terms of commitment, work ethic and performance readiness. She teaches them how to pursue excellence through hard work, teamwork and a willingness to face adversity.”

Imparting such lessons is not done within the framework of a 40-hour week. Ferenz maintains a whirlwind pace with her basketball program while she and her husband, Chris, coach their son, 15-year-old Robert, and 12-year-old twin daughters, Kate and Mikayla, through the rigors of growing up.

“Family is the first priority, but there aren’t enough hours in the day, so you try to balance work and home as well as you can,” Ferenz said. “There are nights during the season when I get off the (practice) court and home at 11:30, write scouting reports until 1 or 2 a.m., and then get up in the morning to get the kids off to school.

“Fortunately for me, Chris also coaches (and teaches) at the high school, so he understands,” she adds. “He has coached at both the college and high school levels, and he knows what it takes. He also finds time to help me with my team, recruiting and coaching, but there are six months during the year when our lives are absolutely crazy.”

In addition to her teaching and administrative duties within the athletics department, Ferenz divides her coaching time between recruiting future student athletes and managing her current team. “I don’t know which side of the recruiting-coaching equation is more challenging, but I know they go hand-in-hand,” she said. “If the recruiting hasn’t been going well, the coaching can be more difficult.”

Recruiting has gone well in recent months, resulting in three talented high school players gaining admission for next fall through the early-decision application process, Ferenz said. “We also have four or five good ones who are excited about Whitman and going through the regular decision process. If we can add a handful of good players to the core group we have returning next year, we should have a strong team.”

By late February, Ferenz was putting the finishing touches on the year’s recruiting cycle. “March and April are the start of the next cycle,” she said. “We spend tons of time going to high school state tournaments and talking to those coaches. July is another big travel month to see the club tournaments. There are summers when we’ll send 1,000 letters to prospective players.”

While recruiting gobbles her time in the off-season, Ferenz invests untold amounts of energy and thought into coaching and shepherding a team through a long season that begins with practices in mid-October. “A basketball season can be very intense and draining — a real roller-coaster ride with lots of up and downs,” she said.

“We got off to a great start last fall, winning our first nine games, which was a new school record for the start of a season. We made the national rankings. Then, we lost a few close games in January. We’re a young team that doesn’t have a lot of depth, and we didn’t handle the adversity very well.”

The Whitman women bounced back from their mid-season hiccup to win five of their last six games to finish in a third-place tie and advance to the NWC playoffs. Those playoffs, as well as a possible berth in the NCAA Div. III national tournament, were up in the air as this article was being written, but Ferenz stays committed to learning life lessons, win or lose.

Win or lose, Ferenz said, “I know I’m still learning from my players, and my hope is that they will continue to learn and grow from the experience that comes with being part of a college athletic team. I had that privilege as a young person, and it’s an experience that stays with you for a lifetime.”

It normally takes a few weeks for the batteries to recharge after a long season, but coaches and players find themselves looking forward soon enough to next year. With no players slated for graduation this spring, Ferenz has reason aplenty for optimism.

“For coaches and players alike, this is a great time to be part of Whitman athletics,” Ferenz said. “We’ve always had a great core group of supporters among the faculty and administration. President Bridges has been very supportive, and the start of the alumni W Club has been wonderful.”

One function of the W Club has been organizing tailgate parties to rally alumni and fans for Whitman teams as they play road games in the Seattle and Portland areas. “Our basketball tailgate party was a great morale boost for our players,” Ferenz said.

“Alumni, many of them former players at Whitman, introduced themselves to our players and wanted to talk about recent games and how the team was doing. The faces of our players just lit up. It’s always a great feeling to know that people care and appreciate what you are doing.”