Taking Beethoven's Fifth to the next level 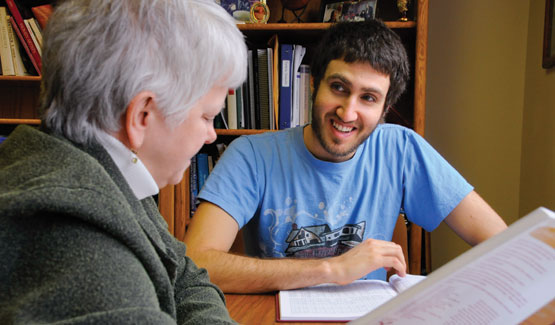 Susan Pickett, violinist, musicologist and Catharine Gould Chism Endowed Chair of Music, knows all of Beethoven’s symphonies. She can re-create them and listen to them in her head, if she wishes, from beginning to end.

And when it comes to Beethoven’s “Fifth Symphony,” which she started playing at age 14, she knows it. Really knows it.

And so Pickett, a Whitman music professor for 28 years — whose research on women composers has been featured on national news shows and who is so passionate about teaching she resents long holiday breaks — didn’t expect any surprises in the “Fifth Symphony.” And she certainly didn’t expect it would be an undergraduate student who would discover the things she didn’t know. 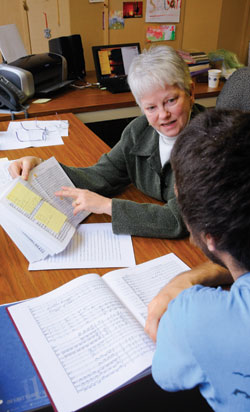 When she agreed to collaborate with Kyle Cotler ’09, a music theory major she admires for his creative approach to the subject, it was because she couldn’t help herself.

She simply didn’t have the time. She had a full schedule and committee work in the department, but she found herself agreeing when Cotler suggested a collaborative formal harmonic analysis project that would dissect a piece of music.

“Ripping a piece apart to understand it.… I couldn’t resist,” she said. And she picked Beethoven’s “Fifth,” because she knew it so well. He would learn; she would watch him learn, and advise along the way.

But barely into the project, Cotler found a tiny interval inside the composition that he realized appeared throughout the piece — the “glue,” basically, of the symphony. Beethoven had used it right away in the first measures, and also had tucked this interval, the E-flat to F, into a minor four-note viola part.

But Cotler’s research revealed it to be one of the symphony’s most important elements.

“The enormity of that interval … It oozed out into the entire piece,” Pickett said. “It was very exciting.”

It’s such a significant discovery that if she were to conduct the piece now, she would do it differently, asking the viola section to emphasize that interval.

“Having Dr. Pickett along on the journey was pretty sensational, learning together things she’s never seen before,” Cotler said of the work that will evolve into his senior thesis.

Cotler, from Los Angeles, whose post-Whitman aspiration was law and politics before he determined that artistic pursuits made him happiest, said he is someone who asks a lot of questions in class, and Pickett never squelches his enthusiasm.

The opposite, in fact. She fosters his creativity, listening to and answering him, “no matter how many times I raised my hand, no matter how relevant or irrelevant, tangential the comment was,” Cotler said.

“If nothing else but for the sake of hypothetical exploration, he should be heard,” Pickett said. She considers him an extraordinary music theorist and the opportunity to collaborate with him well worth the time she didn’t have.