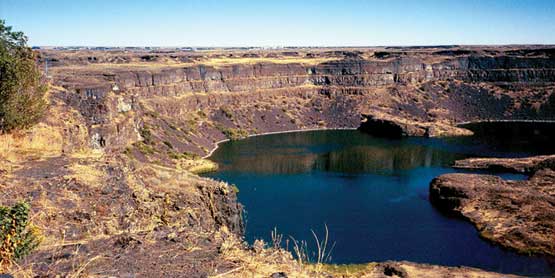 Geology Professor Patrick Spencer and his students travel to the nearby Grand Coulee region to study glacial history. (Above) Dry Falls is a large late glacial (now dry) waterfall.

It seemed fitting to talk about “time” in the office of a professor where at any moment there might be cow, bird or horse sounds or train whistles from some of the wall clocks he likes so much, and collects and puts on his walls.

But it’s the pieces in this geology professor’s office that are stone-cold quiet, the smooth globular and other-shaped concretions, about 100 specimens in all, that have become a time bomb of sorts. A bit of a bomb that has been dropped on some decades-old established research regarding glacial history in the Grand Coulee area.

And Whitman students dropped it.

Geology Professor Patrick Spencer believes his students’ lives were changed with the realization they could make this kind of impact. “Just because they’re 22 years old doesn’t mean they can’t come up with an idea that’s scientifically valid,” Spencer said.

The students, in collaboration with Spencer, found evidence that runs contrary to accepted research on glacial history in the Grand Coulee region of Eastern Washington. 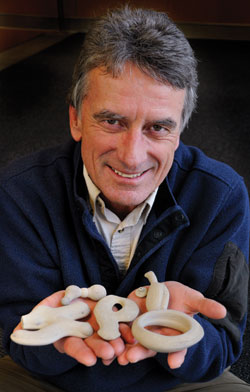 Geology Professor Patrick Spencer displays a few of the many Grand Coulee glacial rock specimens in his office.

Until the Whitman geology team proposed otherwise, it was accepted that the glacier in that area reached its maximum and had begun to recede by about 14,000 years ago. Spencer’s team determined that it may have been earlier, about 16,600 years ago.

Grand Coulee is a dry watercourse in north-central Washington, just to the south of Grand Coulee Dam, formed at least in part by erosion related to the catastrophic flooding that resulted from failure of an ice dam near Missoula, Mont. More than a Great Lakes’ worth of water flowed into Eastern Washington as many as 40 times between about 15,500 and 13,700 years ago, carving the region known as the Channeled Scabland.

A few years ago, Spencer and his students came upon fine-grained sediment that looked like it had been deposited into a lake by seasonal run-off.

“It didn’t make sense,” Spencer said. The latest research available, from the 1980s, showed the area covered in glacial ice 16,000 years ago. Receding of ice wasn’t happening then. The presence of a lake and glacial ice was inconsistent.

Carbon-dating of biological specimens gathered at the site backed up the team’s theories, which they presented at a Geology Society of America meeting. Instead of skepticism, which career geologists as well as students often face after such a talk, respected geologists came up to Spencer afterward to offer their support for the findings, said Spencer. He and his students are crafting a paper on the subject for publication in scholarly journals.

Kate Logan ’08, one of Spencer’s research assistants at that time, now a graduate student at the School of Public and Environmental Affairs at Indiana University, said when she tells students there that she did one-on-one research with a professor, spending time in the field at Grand Coulee, they are “wowed.”

For an undergraduate to have that opportunity is a “really big deal,” she said. At a large research institution, “it would have been a lot harder.” Making it even more special was working with Spencer, whose passion for the work — “You’d see him in the field racing up to an outcrop and really getting excited about a cliff of rocks he’s probably seen 30 times” — helped convince her to major in geology.

Logan said she took on the research as part of her senior honors thesis. Although a thesis isn’t required in the geology department, she felt the project was an opportunity for an undergraduate to “contribute something significant to the geologic community.”

“Pat and I had a weekly meeting where we would talk about our ideas,” Logan said. “We consulted with each other on different sites … in the field we each took turns collecting samples, measuring. We made joint decisions on a lot of aspects in the field.”

Spencer said when he was pursuing a college geology degree nearly 40 years ago, even though it’s a field science, students mainly studied in a classroom, took tests, wrote papers. And students weren’t encouraged to think creatively. But at Whitman, students often find themselves in the great outdoors and in collaborative situations with professors that encourage them to let their imaginations fly.

And ultimately, a collaborative project with Spencer, Logan and two other students, Rebecca Burand ’06 and Meghan Mix ’04, has tweaked some history.

“They were thinking out of the box,” Spencer said.