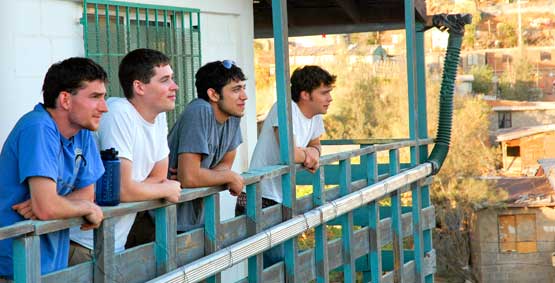 Aaron Bobrow-Strain had the opportunity as an undergraduate student to take a trip to Nicaragua and El Salvador during those countries’ civil wars, to meet people who had “nothing” in the way of material possessions or wealth but were still willing to take risks to make things better. And there was the rich culture and beautiful countryside for him to absorb. The totality of the experience “completely changed my life,” said Bobrow-Strain, now a Whitman College assistant professor of politics.

After that experience, he changed his major from archaeology and “never looked back — immersed himself in Latin America, learned Spanish and published on the subject. When he came to Whitman in 2004, he wanted to create the same experiential learning opportunities for his students.

The result was the U.S.-Mexico border trip based in Arizona and Mexico that has taken place three times, so far. The fourth trip is scheduled for the end of this school year. Students meet with people who have different perspectives on border issues, including border patrol officers and migrants, immigration rights attorneys, business people, immigration rights activists, church groups, factory managers and workers.

Program participant on a multi-day walk recreating the journey of a migrant illegally traveling from Mexico into the USA. The cross represents lives lost by those crossing the desert.

Ginny Robbins ’08 plays with a girl at a playground in Nogales, Mexico, a bustling border down just across the Arizona border.

The students have organized similar trips — collaborations where Bobrow-Strain has taken an advisory role.

Now, it’s his students’ turn to talk about their life-changing experiences.

Jonathan Goldenberg ’09, a lead organizer for the 2008 border trip, said he learned that his “logical” long-held position on immigration was “simplistic.” His concern, for example, about migrants using additional resources. He hadn’t, until the border trip, considered the vast amount of resources migrants produce, compared to the vast amount of resources used by established Americans in lavish homes, he said. That added a new dimension to the conversation for him.

The experiences have even influenced job decisions. Andrea Miller ’09, another lead organizer for a recent trip, will use what she learned in a post-graduation job already secured as coordinator and grant writer for CAUSA, Oregon’s immigrant rights coalition.

Bobrow-Strain’s experience as a student is “90 percent” of why he teaches at a liberal arts college, and one thing that makes Whitman a particularly exciting place to teach is “collaborating with students,” he said.

Bobrow-Strain and his students haven’t had to leave the state to have profound experiences regarding immigration issues.

There was also a three-day trip in eastern Washington to explore immigration issues in Washington State. Unforgettable experiences resulted, but Bobrow-Strain said what that trip provided students is minor compared to the second in-state trip in March 2008, which the students organized themselves.

The students’ trip was “more rigorous, with more layers of complexity,” he said. And that’s good: the mark of a good course is that “you learn from your students.”

For that trip, taken during Spring Break 2008, students also raised all the funds, and kept costs manageable by sleeping in churches, community centers and in homes. Student trip leaders say Bobrow-Strain and his programs inspired them to spend their vacation exploring the immigration issue in even more depth.

Bobrow-Strain said the real work happens when the travelers return to campus. Students, who have heard valid arguments on both sides of the issue, learn how not to become paralyzed by that, to reflect on the experience, and then take action to expose the campus and local community to what they experienced. They create art and photo exhibits, correspond with state legislators about migrant issues, bring relevant speakers to campus while honing their understanding of the issues in the classroom.

Aaron Bobrow-Strain — author of “'Intimate Enemies: Landowners, Power, and Violence in Chiapas” (Duke University Press 2007) — said recently that the “ball is rolling” on plans for the border trip that will take place at the end of the school year. Like always, 12 students, from all majors and years, will participate. But this year, the focus is changing.

“I'm excited about shifting more toward the root, economic causes of migration,” he said. “It's always been an important component of the trips, but, in the past, the immediate humanitarian crisis of border crossings in the desert tended to be the primary focus.”

He’s “also curious (and worried) about the way the U.S. economic crisis is affecting communities in Mexico.

“We're starting to see a lot of migrants returning to Mexico because construction and restaurant jobs are drying up, remittances are falling, etc. And no one is quite sure what this all will mean for Mexico.”