Crafting a work of art 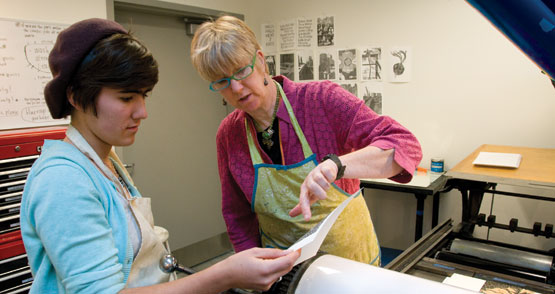 Elena Mitchel ’10 works with Mare Blocker, visiting assistant professor of art shown and the book art press in the new Fouts Center for Visual Arts. Their artwork, which features prints of life in Walla Walla, is currently on display in a Seattle show.

Mare Blocker, visiting assistant professor of art — and an artist whose work is in the

J. Paul Getty Museum, Getty Research Center, in Los Angeles, and in other collections here and abroad — has been getting some suggestions lately about her work. From one of her students.

Suggestions gladly accepted and put to use.

Blocker and Elena Mitchel ’10 — a “super talented” art major — collaborated to create book art. They took photographs and then, carving for hours, turned those scenes into linoleum blocks that were made into 48 prints of life in Walla Walla: faces of farmers who sell produce at the farmers’ market, a special take-out box from a bakery, a spilled glass of wine. 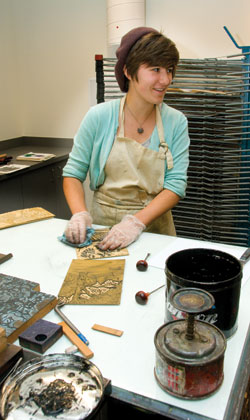 Mitchel works on linoleum blocks for a book art project she collaborated on with Mare Blocker.

It’s the kind of collaboration Whitman wants for its students: The student’s ideas and approaches mix with the instructor’s. Blocker believes such collaboration strengthens flexibility skills — pre-conceived notions change as “everyone’s voice is weighed.”

“Elena and I have worked on this project together from the very start,” Blocker said, beginning when they wrote the grant proposal together that earned them a Sally Ann Abshire Research Scholar Award for faculty-student research.

Blocker, whose past collaborations include working with Charles Simic, U.S poet laureate, to create an illustration for his poem “Watch Repair,” said she had never before been inspired to work with a student on a project such as this. She was always concerned about stifling creativity.

“I don’t want to put my voice on top of another person’s,” Blocker said.

But she found that Mitchel’s strong talent complements, not mimics, her own, and Blocker appreciates Mitchel’s energy and enthusiasm.

“I saw a lot of my young self in her,” Blocker said.

Blocker, who bought a 1.5-ton printing press at age 23 and started her own publishing company, admires the like-spirit of Mitchel, 20, who got a vendor’s license and successfully sold her artwork at the Walla Walla Farmers’ Market last summer.

Mitchel, of Sebastopol, Calif., describes herself as strong-willed and bent on living life her way. A case in point: When she won a goat at a raffle, she convinced her shocked parents to let it live in the back yard for a couple of years. For a time, she had aspirations of being a goat farmer and even worked at a goat dairy.

Yet she came to Whitman with art credentials already in her portfolio, including work with professional artists on two public murals in downtown Santa Rosa, Calif. Even so, Mitchel didn’t plan to major in art; others had told her she should and so she was determined “to do something people didn’t expect.” That is, until she discovered at Whitman that she’s happiest when creating art.

Now her collaboration with Blocker is featured in a show in Seattle. Of the 50 copies they produced, one went to the Abshire family, whose gift made the project possible. Several other books will go to public collections, and the remaining 40 copies will be available for purchase this month at Wessel and Lieberman Booksellers in Seattle. A reception for the artists will be held there on April 2.

For more information, including times and dates of upcoming lectures about the book, contact Blocker at blockemk@whitman.edu.