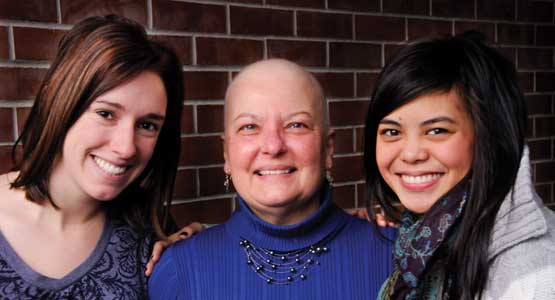 English major Mary-Eileen Gallagher ’09 was all set to collaborate with English Professor Jean Carwile Masteller on an Abshire research project about poet Emily Dickinson’s influence on music when the professor was diagnosed with breast cancer in the summer of 2008. The team delayed the work until this spring, but only because Gallagher insisted.

Instead they found themselves immersed in another type of collaboration between themselves and what became three, make that four, people working together.

Carwile Masteller, in response to the many offers of help she received, asked instead that people in the English department develop community service projects to help cancer patients of limited means who don’t have the level of insurance help she has.

“She is battling this disease, and she has turned it into this opportunity for students to have hope, to give back … This is not an abstract learning experience; it’s a very emotional experience.

“It was impressive to me that Jean had the courage to turn this into a learning opportunity as well as an opportunity to give something back to the community.”

Carwile Masteller tied her community service idea to literature, referring to Benjamin Franklin’s autobiography, where it detailed how a young Franklin joined with friends to form a junto to foster community improvements. Then each junto member formed another junto with other friends to promote improvements and so on.

Two students took on the challenge.

Valerie Lopez ’09 became a sales representative for a cosmetics company to raise money for Carwile Masteller’s charities. All of her profit goes to the cause. So far, the total is $170.

Gallagher, meanwhile, organized an arts and crafts fair in December — with the help of Mare Blocker, an artist and visiting art professor at Whitman — that featured pieces created by members of the Whitman and Walla Walla communities. The fair, held in the Olin Hall breezeway gallery, raised more than $1,500.

“I was just the instigator of the event,” Carwile Masteller said. “So, it’s collaboration in the best sense: I motivated; they responded.”