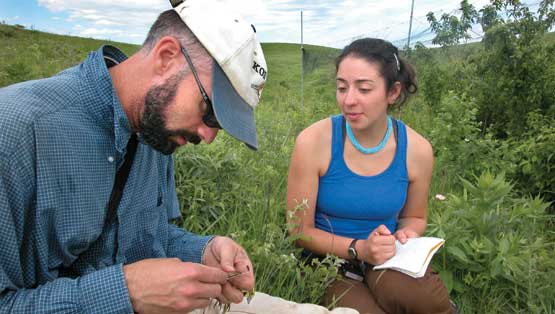 Amy Strauss ’09 identified a new phrase classification in the songs of Dickcissels while she and Tim Parker, assistant professor of biology, were collecting data in Kansas during the summer of 2008.

The trick is to make the little bird really angry.

And finally, he’ll try to take action by flying toward what he thinks is a singing and trespassing male Dickcissel invading his territory.

But in this case it wasn’t a bird intruder — just a recording of a male Dickcissel singing the same song over and over so that a Whitman student and her professor could lure the offended real bird to a spot where a net awaited for a catch-and-tag operation.

Parker holds a Dickcissel songbird in his hand.

Assistant Professor of Biology Tim Parker, whose research has focused mainly on the role of sexual dimorphic “ornaments” in the interactions between individual animals, has in his portfolio a number of completed research projects. They include his Ph.D. work at the University of New Mexico on the central role social interactions play in determining steroid hormone levels and expressions of sexual signals in red junglefowl.

But for an ongoing project on songbirds in Kansas’ Flint Hills, he wanted to pick a Whitman student’s brain.

Amy Strauss ’09, a biology and environmental studies major, wanted the job and spent part of the summer with Parker collecting data on the Dickcissel, a common grassland bird in the central United States.

During Strauss’ stint she discovered something about Dickcissels unknown to Parker, who has been researching the bird since 2005 with the support of a National Science Foundation grant to Kansas State University and funds from Whitman College.

In addition, it’s hoped that data they collected this summer will give them a possible answer for the difference in dialects, one element of Parker’s ongoing research.

“Our hypothesis is that the variation in habitat and habitat quality can cause variations in songs,” Parker said.

Strauss — who grew up in Berkeley, Calif., with a dad who was quick on the draw with his binoculars whenever there was a bird in the back yard — has always liked birds. But the pre-med student didn’t imagine a future studying them. That changed when she began taking classes of a different scientific kind — the natural sciences.

This project helped Strauss see “how the process of biology research takes place,” and she plans to go to graduate school to continue her research. “Tim’s incredible knowledge of every grassland species there, from birds to plants to insects, was amazing.”