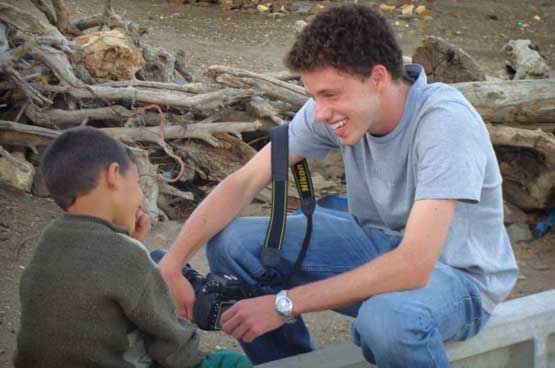 “I am followed everywhere by the police,” the president of a nongovernmental organization working on behalf of sub-Saharan migrants, mutters to me. “It is a new strategy of the Moroccan state.” To prove his point, he gestures to a man across the street from us, who quickly ducks his head. As I walk the dark roads of Oujda, a Moroccan border town, a twinge of fear shoots down my spine. I am far from the idyllic wheat fields of Walla Walla.

For decades, Morocco has been the preferred jumping-off point for sub-Saharan Africans illegally entering Europe. Only the Mediterranean Sea separates Morocco from Spain. Morocco’s proximity to Spain, in some cases fewer than 20 miles, has made this North African nation an ideal place to shove off for a life of greater economic opportunity. Every night, under the cloak of darkness, traffickers ferry migrants across the narrow strait of the Mediterranean in boats.

Until recently, traffickers met little resistance from Morocco and Europe. But within the last two years, Morocco has been transformed from a transit state to the final destination for sub-Saharan migrants. This change is so recent that there’s little scholarship on the matter; no books exist, and there are few newspaper articles on this massive paradigm shift. So in the final month of my study abroad in Morocco, I headed to the epicenter of the trafficking networks that clandestinely funnel people throughout Morocco: Oujda.

This border city is both the point of arrival, and often the place of departure as well. Deportees from Rabat, Casablanca and the rest of Morocco are bused here. At night, government security officials march deported migrants into the desert, to the Algerian border. There, they are abandoned, and told to walk into Algeria. Often, the Algerian military is waiting on the other side. As one Moroccan put it, the migrants are like “ping-pong balls,” bounced back and forth between two feuding nations. Most eventually end up back in Oujda, a place as hellish as the bandit-filled desert just outside the city.

Far from Oujda’s central district, 2,000 sub-Saharan migrants live in makeshift refugee camps, dubbed tranquillos. Some camps are permanent, while others move around to reduce the likelihood of police raids. Shelter is primitive: Blue tarps provide minimal cover, and most sleep on the bare ground. At night, migrants trek to the nearby university, where sympathetic students give them water.

While Andrew Propp ’10 found children were fascinated with his camera, most adults he encountered in Morocco were adamant that he not photograph them. He did capture beautiful scenery in Morocco, but the real story he discovered in the border camps — the story he tells here — was difficult to document with the few images he was allowed to shoot. Propp surreptitiously shot the photo above while visiting a border camp near a university.

Employment isn’t a possibility for sub-Saharan migrants stranded in Oujda. The unemployment rate is well above the nationwide average of 9 percent. With no way to work, begging is often the only alternative. For those who fall ill, there is little recourse. Police monitor the hospitals, arresting anyone without proper identity papers before treatment is administered. Similarly, they tightly control the highways, train lines and bus routes. Even within Oujda, taxi drivers often refuse to pick up sub-Saharans, for fear of being pulled over by local law enforcement. Travel by foot is the most practical, and often only, way to leave the city.

The humanitarian situation in Oujda is dire. Yet it has remained largely unreported. Only one organization addresses the needs of sub-Saharans trapped in these tranquillos, and it can only provide emergency triage — an evaluation of a broken wrist, or a meal of couscous once a week. Journalists have tried to work in the region but are harassed by both the police and those living in the camps. Morocco isn’t eager to publicize the situation, and refugees in the camps, so anxious about their tenuous situations, don’t welcome foreigners either.

Learn more:
View Andrew’s documentary on his experience in Morocco on the Web

During my time abroad, I spoke with dozens of sub-Saharan Africans illegally living in Morocco. They talked about the challenges they faced — persistent racism, discrimination and their daily struggles to survive. And they joked about having to pay twice the price a Moroccan would for a box of tangerines, or an apartment. “Then why make the tortuous journey?” I often asked. One Nigerian migrant said to me: “My family cannot continue to be like this and be poor. I have to fight. I have to make things better. I have to look for a greener pasture, to make life easier for my younger ones and my immediate family. Let me struggle … either I die at the sea or enter into Europe.”

In places like Oujda, where the world has turned a blind eye, it’s tempting to define the situation in black and white terms. A liberal arts education teaches one to deconstruct commonly held perceptions, to challenge these norms. While it is easy to decry Morocco, to label it a racist, discriminatory nation with little sympathy for others, that is not fair. In an effort to secure its borders, the European Union has shifted its frontier to North Africa, and is paying Morocco to stem the flow of migrants. Morocco may be the one getting its hands dirty, but Europe is complicit as well.

After I conducted an interview with a sub-Saharan African, I was always asked what tangible effect my research would have on their lives. The answer, of course, was little. Contact information would be exchanged, and I would be implored to help.

As an American from a prestigious college, I embodied their little remaining hope. One Cameroonian man informed me that because I was from the United States, I would be able to solve his problems with one phone call. While I wish that were true, as a student merely conducting research I didn’t have that power.

Amidst the guilt I still feel for not being able to more profoundly affect the situation in Oujda, I hear the words of a man I spoke with at a tranquillo. Pointing to his eye, he said: “I see this, but cannot write about it. You see this, and can write about it. Tell the world.” As a Whitman student, I’ve been taught to think critically and write. The least I can do is tell the stories of the voiceless. 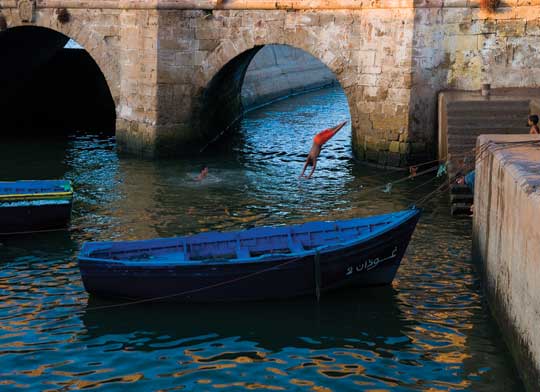 Boys dive off a quiet section of the busy harbor at Essaouira, a seaside Moroccan city on the Atlantic Ocean. Nearby, fishermen sold their catches, and tourists enjoyed the setting sun.