The old nursery-school rhyme asks, “Mary, Mary quite contrary, how does your garden grow?”

For the students who invest their time and energy in the Organic Garden, the answer is, “very well, thank you.”

But a better question might be, “What does your garden grow?”

The answer to that? Everything from kiwis to asparagus and Goumis to Jerusalem artichokes. Not to mention every berry you can name, including three varieties of gooseberries.

The Organic Garden has entered its “golden age” after more than a decade of ebbs and flows with waves of student interest and involvement, said James Most ’08, whose own passion for the project blossomed in his last two years at Whitman.

“Sometimes the garden has been fertile and sometimes it’s a big weed patch,” he said. The 2008 growing season fell decidedly into the fertile category with “a phenomenal amount of produce,” gleaned by more than 50 people from campus and the Walla Walla community.

He believes the increased participation and the bounty of the garden are products of a nationwide local food movement gaining steam during the economic crisis as people are “getting back to basics,” coupled with unprecedented organization by students who make up the ASWC-sponsored Organic Garden Club.

“For the first time in history, all of the space is organized and in use in the garden,” said Most, a past club president. A 16-bed crop rotation is in place, as are patches of herbs and flowers — plant-starts from a Walla Walla woman’s garden — along with a mini-orchard that features six different types of fruit. Lots of perennials, planted in the last year, are easy to maintain and require little water.

Organizers increased the number of compost bins, which fill up quickly with neighbors’ household contributions; enormous quantities of organic leaves and grass deposited by the campus landscape crew; and 21 buckets of table scraps collected from the college dining halls each week during warmer months. 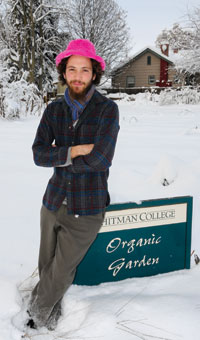 When James Most ’08 graduated in December, the organic garden was hibernating under two feet of snow.

“We have rockin’ compost,” Most said. “It is incredible soil, dark and rich.” The compost is layered with wet cardboard, newspaper and wood chips in a sheet-mulching process to preserve and conserve moisture in the crop beds.

“We are cultivating and feeding the soil, making it healthy so that it can grow healthy vegetables,” Most said. Until he graduated and left campus in December 2008, he lived next to the garden, and saw community members come and go all day nearly every day to bring composting materials to the garden or take compost home for their own gardens.

The Organic Garden’s renaissance also has been nurtured by an alumni gift that supports a paid intern 10 hours a week to oversee the growing season (although club organizers trimmed the schedule recently because the fund is dwindling), and by the guiding hands of adviser Bob Biles, campus landscape specialist.

Perhaps the most significant contribution to the future success of the garden is the organizers’ effort to establish continuity in the volunteer workforce and club management by getting students connected to the garden earlier in their Whitman careers.

“In years past we had a small crew of juniors and seniors” leading the effort, said Most. “In the past year or two we have involved first-years and sophomores. We’re ready to hand it over to them,” he said.

All of which bodes well for the 2009 season, which will be ushered in by three garden club co-presidents, all sophomores. Co-President Robin Lewis ’11 connected with the garden soon after her arrival at Whitman. She was “passionately interested and involved in the local/organic food movement” even before college.

“I really feel that we are in the midst of a movement, not a fad,” said Lewis, who predicts more students will get involved with the garden as they become increasingly aware of where their food is coming from and how it is grown.

Most agrees. The psychology major completed an independent study on permaculture — an agricultural system that integrates human activity and natural surroundings to create efficient self-sustaining ecosystems — with Heidi Dobson, professor of biology and the club’s faculty adviser.

“The way food is produced in this country today is a system that won’t survive,” said Most, a view reinforced for him in a class about Whitman and the global food system. Many traditional farming methods “damage the soil, are taxing on energy resources and extremely taxing on the greater ecosystem,” he said. Learning to garden “enables us to nurture partnerships and provide for a lot of our own needs.

“Gardening is a dying art in my generation,” Most said. “We didn’t grow up with it. We were prepared to learn and work with computers.”

His gardening expertise has been self-taught from “reading everything I could get my hands on” and listening carefully to Biles’ advice. “I became a sponge for knowledge. Everywhere I went I talked to people about gardening.” Lessons from the garden were applicable in his classes; things he learned in the classroom informed his work in the garden, said Most, who plans a career in permaculture food forestry.

Lewis views her involvement in the Organic Garden in much the same way. “For me, this project goes beyond an extracurricular; I want to farm after college, and I use the garden as a place to educate myself for my future,” she said. She plans to grow organic vegetables for restaurants and general use under the model of Community Supported Agriculture.

“Ideally, I’d like to combine farming with education and turn my farm into a community hub where youth and adults alike can come and learn how to grow their own food, as well as methods of food preservation,” Lewis said.

Meanwhile, as she devotes her time and energy to enriching her mind in her college classes, the Organic Garden is a way to use her body in a meaningful way as well.

“The garden has provided me with much needed balance, calmness and perspective amidst the whirlwind of papers, classes, friends and work,” she said. 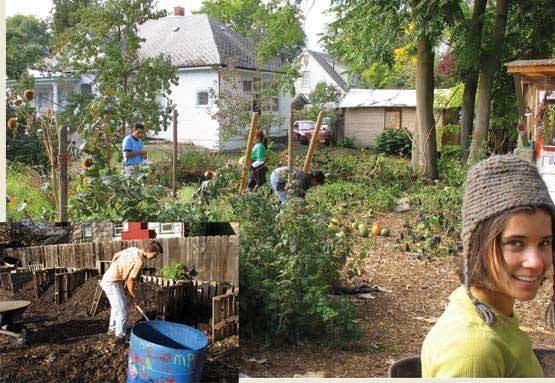 (Left) The Organic Garden Club has increased the number of compost bins at the garden. Peter Gurche ’11, co-president of the club, also leads the Campus Greens Compost Campaign. (Above) Dana Bialek ’11 is the third co-president of the club. During the summer, the Whitman community and neighbors glean hundreds of pounds of vegetables from the bountiful garden.
For more information on the Organic Garden, visit www.whitman.edu/organic_garden.