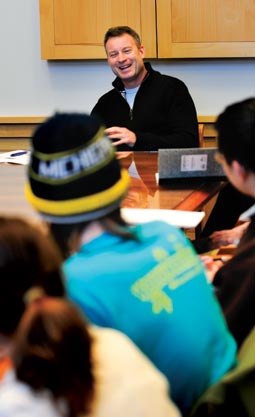 Before lecturing in the evening, Tim Egan, Pulitzer Prize-winning veteran reporter, met with first-year politics students and held a workshop for columnists of the Pioneer student newspaper.

Pulitzer and Nobel winners, a theater founder and a Guantanamo Bay attorney visited campus this winter, filling lecture halls and curious minds with their knowledge and perspectives.

“Everyone should bookmark 2008 as the start of about six months to a year that shook the world,” Egan said. “I think we’re living through an historic moment.”

Egan, who holds an honorary doctorate from Whitman, lives in Seattle and has authored five books, including “The Worst Hard Time,” a story about Dust Bowl survivors that won the 2006 National Book Award for nonfiction. In 2001 he shared the Pulitzer Prize with a team of Times reporters for the series “How Race is Lived in America.”

Nobel Prize-winning research scientist John Fyfe discussed climate change as part of Whitman Campus Climate Challenge’s participation in the National Teach-In on climate change and sustainability. On the same night, John McKay — one of the seven state attorneys fired by the Bush administration, now a law professor at Seattle University — delivered the Langlie Lecture on the topic of “Ethics and Transcendence in American Politics.”

Video: Timothy Egan on "The Politics of Possibility"

Michael Rodh, founder of Sojourn Theatre, a Portland, Ore.-based company that tours nationally and won the 2005 Americans for the Arts Animating Democracy Exemplar Award, led a workshop for students, then lectured in the evening.

Mark Danbeaux, an attorney who has represented prisoners at the Guantanamo Bay Detention Center, was the keynote speaker at the first Whitman in the World Banquet sponsored by the new Model United Nations Club. Danbeaux, a law professor and director of the Seton Hall Law School Center for Policy and Research, is internationally known for publishing a series of reports on Guantanamo.