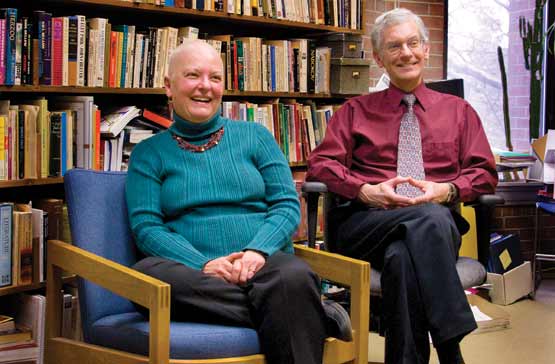 Jean Carwile Masteller and Rick Masteller shared this office when they first came to Whitman in 1978. Now teaching their final semester, they are excited about more time for her orchids and his photography.

It’s close to being the most challenging time in their lives, agrees the husband and wife team of English Professors Rick Masteller and Jean Carwile Masteller. But they have each other, in the face of Jean’s cancer fight, and she has plenty of “medicine” that has accumulated on the shelves of the only office she has had at Whitman since she arrived in 1978.

Books of medicine, that is, a dose of Ralph Waldo Emerson.

But Emerson’s medicine foremost: Just four of his words remind her of what to do.

“Up again, old heart,” he wrote in an essay. She doses herself often with those words.

And her favorite poem of all, an Emily Dickinson, ends with a reminder: “And Life steps almost straight.”

And there’s a character in “The Beast in the Jungle,” a James’ story, that reminds her not to wait to live, to live now. But James is preaching to the choir. Jean, long known as effusive, still seems spring-loaded as she sits on the edge of her chair like a thoroughbred in a starting gate — bottled-up motion, ready to dash. She still teaches classes, works on college committees — always doing, doing.

It is close to being the most challenging time for them, this, their last year teaching at Whitman as they prepare to move on to other adventures — continuing their research, for one. And Jean, whose cancer treatments are to be completed in June, the same month as their 40th wedding anniversary, wants to get serious about pampering her orchid plants. Rick wants to spend more time on photography.

But it’s not the most challenging time in their lives. The most challenging, they agree, was after an innovative Whitman College did something that ordinarily wasn’t done way back in 1978. The college created a shared position, giving the one available English position to both of the Masteller applicants.

As if sharing an unusual joint appointment were not adventure enough, the couple also topped off their first year at Whitman with the birth of their daughter, Kerry. At a time when the college hadn’t had to deal with many family issues — there were only five women tenure-track faculty members and none had children — the couple undertook the dual task of pursuing their professional success and demonstrating that the college had made the right decision in offering a shared position so future husband-wife teams could have a similar opportunity.

They proved it was a positive thing, and today the college has many such appointments.

And the Mastellers also succeeded in being professors who aren’t easy to forget — or thank enough.

“For all his quietness, Rick has one of the deepest souls of anyone I have known,” said Sophie Johnson ’08. “He weeps over poetry.” And Jean is Johnson’s mentor. She also admires the devotion between the Mastellers. “They take care of each other, support each other, are rarely seen apart outside their individual classes,” Johnson said.

At every semester’s end the Mastellers invite students over for cheesecake or crab dip — at the fireplace in the winter and in the yard in the spring — to discuss “everything from new criticism to New Orleans,” Johnson said. Because of their influence, Johnson, now in the Teach for America program in New Orleans, hopes to pass on the love of literature they inspired in her.

Theresa DiPasquale, associate professor of English, said Jean has discussed teaching with her countless times and has given “a wonderful sense of perspective that has added to my own feel for the classroom.” Rick’s office is next to DiPasquale’s “and he unfailingly has a moment for me when I have a question or a thought I’ve been mulling and wanting to share.”

Sharon Alker, assistant professor of English and general studies, said the Mastellers “have been a constant font of wisdom and source of encouragement throughout the years I’ve worked here. They have been very generous in helping me to develop my teaching techniques, offering rich and remarkably useful techniques that are now a regular part of my teaching tool kit.”

Love of literature started early for the Mastellers. For Jean, it was while growing up in Lynchburg, Va., the child of grocery store owners. She was expected to help can fruit and vegetables in the kitchen, but Jean invariably would sneak out to read. An early aspiration was to become a doctor. But at Lynchburg College, first in her family to go to college, she left medical aspirations behind and took up with the literature she loved.

Meanwhile, Rick, son of a homemaker and a tool design engineer for Bell Labs, growing up in Reading, Pa., was a backyard astronomer. He loved to read, loved photography and worked in a camera shop, and planned to become an astrophysicist. However, at the University of Rochester, he discovered the astrophysics path involved “exotic equipment, arcane formulae and charts” and little stargazing.

“It wasn’t romantic,” he said.

So he turned to his other love, literature, and when Rick and Jean both ended up at the University of Virginia to do graduate work in English and American literature, they found each other. He would end up proposing in the Edgar Allan Poe Garden.

Both would teach at Illinois State University and the University of Minnesota while finishing their doctorates in American studies before coming to Whitman. Jean’s focus is on American literature, American studies, women writers and the relationship of canonical and popular culture. Her research interests include work on 19th century popular fiction. She has published papers on Henry David Thoreau, Andrew Jackson Downing and others, and has contributed to the Emily Dickinson Encyclopedia.

Rick’s specialty is 20th century American literature. His research has focused on the relations between literature and visual art in an American studies context, and he has published essays on the vision of the America purveyed by western stereographs of the late 19th century, on definitions of modernism as revealed in the American reception of the sculptor Constantin Brancusi, and on the satiric vision of Reginald Marsh and John Dos Passos in the 1930s.

In Jean’s office, Olin 212, which the Mastellers shared until Rick got his own, there are still toys from when their daughter, now a 29-year-old Harvard University music librarian, spent time there as a child. And there are pictures of the family cat that Kerry grew up with. And all that medicine — books, up to the ceiling. Jean might give some away. Maybe.

She doesn’t even want to think about the moment when she’ll walk out of that office for the last time. Even cancer hasn’t kept her away. She’s still teaching, albeit a slightly lighter schedule. Students also have been there for her. One student brought dinner to Rick to take home on one of Jean’s chemotherapy treatment days. Many have left notes under her door. Former students have mailed letters.

But it’s almost time for a new chapter — just a couple more months now. And she and Rick, whose support during this period “has meant everything,” she said, are approaching it with heart. Even when it’s heavy.

Emerson would be proud.