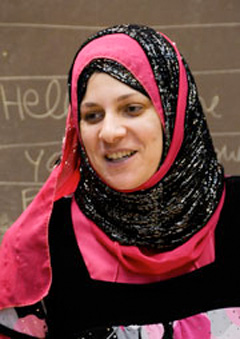 “It’s not only learning how to speak and how to write, but also how to sing.”

These are the words used by Whitman’s Fulbright Scholar-in-Residence Mona Hashish to describe the study of Arabic.

“We learn through reading, writing, singing. We also can make a play. The language is not only a means of talking. It also can be entertaining.”

Hashish, a professor of English literature and drama from Suez Canal University in Ismailia, Egypt, arrived in Walla Walla with her family in August to teach at Whitman for the 2008-2009 academic year. Among classes she taught this year are Arabic and a world literature course on children’s drama, in which she delves into such topics as cubist art, contemporary criticism and Magic Realism.

A two-time recipient of the Fulbright scholarship, Hashish worked in Vermont, where she was an instructor at St. Michaels College, and studied for her Ph.D. in Italy and Saudi Arabia, while her husband, Emad Ali, taught physics.

The process of bringing Hashish to Whitman began two years ago when the college applied to the Fulbright Commission. In March 2007, Professor of Foreign Language and Literatures Mary Anne O’Neil received word that Whitman was a finalist to receive a Fulbright scholar.

“There are actually very few of these Fulbright Scholars-in-Residence awarded every year,” said O’Neil. “There are two different ways to apply. You can actually have someone in mind, and if the Fulbright Commission and the U.S. government cooperates with those countries you could see that happen. In our case it was a lot more complicated because we simply applied for a person who could teach Arabic.”

Student enrollment in foreign languages has peaked in recent years. In addition to expanding course offerings and cultivating international prestige at Whitman, Hashish’s appointment is meant to address the growing language needs of students.

“We need to offer more language classes because students are so interested in foreign languages right now,” O’Neil said.

Hashish, her husband and two daughters are enjoying their stay in Walla Walla.

“We feel relaxed, and everybody’s smiling at our faces. In Islam, when you smile to anybody’s face you are rewarded by God.”

Hashish has been impressed by the intellect of her new students as well as by the compassion of her colleagues.

“The students are well aware of what’s happening around them. They talk freely about things. They tell me their own analyses, and they are not scared, they are not shy. It is completely different in Egypt,” Hashish explained. “Here I enjoy the new experience, and I like to develop myself and upgrade myself. I am not only teaching, I am also learning. I learn from the students, I learn from different things from all the people around me, even at home. I learn from the neighbors.”

Not least of the advantages of having Hashish on campus this year are her dedication and drive, according to O’Neil. Her enthusiasm is reflected in her teaching style, which O’Neil describes as engaging and very hands-on.

“She had one exercise in Arabic where the students had to say ‘I want’ and then an object, and she brought in all these things, including food, because of the notion of hospitality that she feels can’t be separated from the way you teach Arabic,” O’Neil said.

Fulbright scholars “are always going to be people who are very ambitious, very hard-working, who are tenacious – they don’t let go of something. I think that in itself is just a wonderful thing to have at Whitman.”