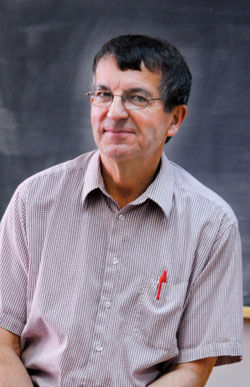 As Professor Robert “Bob” Fontenot teaches his final semester of mathematics classes and reflects on his 34 years at Whitman, he is most proud of his “relationships with students, the friendship and the mentoring.”

Although he earned the A.E. Lange Award for Distinguished Science Teaching twice (most recently in 2008) and was a Garrett Fellow, it is the invitations to reunions, and letters and visits from former students that he most cherishes.

Fontenot’s perspective — as a teacher foremost — has been to learn everything he can about mathematics. Decades after earning his doctorate in the subject from Louisiana State University, he is still learning and developing his large “math repertoire.”

He hopes his enthusiasm for mathematics has been contagious in the classroom and that he demonstrated to his students that “mathematics is a way of thinking and that it’s fun.” Yet he worries that for some students, who struggle in the subject he thrives on, mathematics is not fun at all. “I hope the ones I’ve dealt with in my office hours have learned to forgive themselves,” he said. “There are lots of kinds of intelligence. People shouldn’t beat themselves up if they aren’t good at mathematics.”

Meanwhile, over the decades his “well-rounded, bright and interesting” students have taught him “to step outside my comfort zone and learn new things. They stretch themselves … and I admire that.”

He will follow their example by stretching himself to learn “street Spanish,” a skill he plans to use in volunteer work with St. Vincent de Paul and other local social service agencies.

Research and soaking up the interesting lectures and entertainment on campus also are at the top of his to-do list. The high energy he demands of himself in the classroom hasn’t left much stamina for these interests in recent years, he said. He will work at Penrose Library on a research project in Real Analysis, the subject theory behind calculus, and wants to publish on the topic of First Return Convergence. He may take a few classes — or even teach some — through Quest, an institute for lifelong learners at the local community college.

He and his wife, Mary Jo, who is retiring from her elementary school teaching career, may eventually visit France for “reasons of ethnic background,” said Fontenot, who grew up in Louisiana with parents who spoke 18th century French. The couple certainly will travel to visit their children and their spouses — son Barry, a photographer in Los Angeles; and daughters Nikki, pursuing a doctorate in Newark, Del., and Melissa, completing pre-requisites for graduate work in nutrition in Houston.

But first, Bob and Mary Jo will celebrate their newfound freedom — and their 40th anniversary — with an Alaskan cruise this summer.

Despite Bob’s busy itinerary, he knows he will miss the students and his “wonderful and supportive” colleagues. But as much as he loves mathematics, he is very clear on this point: He will not miss grading papers.