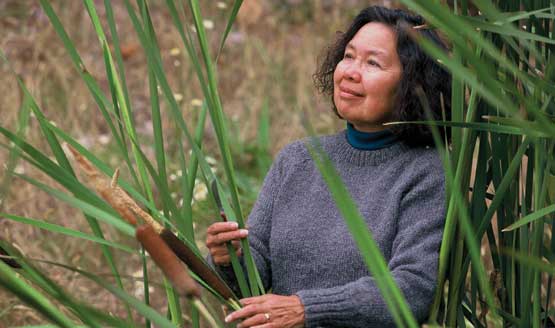 Caption: Pat Courtney Gold ’61 sometimes travels hundreds of miles from her home in Scappoose, Ore., to find the plants she needs for fibers to weave her baskets.

She had waited for years, for just the right time, to make a trip across the country to be with it, to see it. And when museum staff brought out the old basket, she could feel her heart begin to pound. 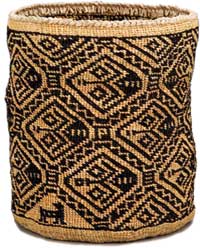 This basket, woven in 1805 and now part of the Harvard Peabody Museum collection, left Gold speechless when she held it. 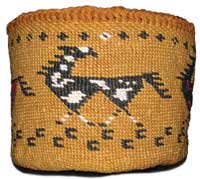 Woven by Gold, this basket features mustangs inspired by drawings on the walls of the Dordogne Caves in France. Gold has received national recognition for her work to preserve the heritage of her tribe. These 2-by-2 inch pouches created by Gold have different traditional designs on each side. Embellished with beads and charms, they historically were used as medicine pouches. “Now people keep special charms and trinkets in them,” Gold said.

As if a beloved someone had appeared unexpectedly from behind a door.

Staff members at Harvard’s Peabody Museum of Archaeology let her hold the basket, which is more than 200 years old, in her gloved hands. While she did, they asked her what she was feeling. She remembers just waving a hand to indicate she couldn’t speak.

“To me it represented my culture; I felt that I was touching my ancestors … It was such an emotional (and spiritual) experience,” Gold said. “I held it for six hours.”

The Wasco tribe, her tribe — a branch of the Chinooks who lived near the Columbia River — traded this basket in 1805 to explorers Lewis and Clark.

The basket’s intricate design of horizontal faces set in geometric shapes reflected the tribe’s view of time as a circle: no beginning, no end. Baskets, items of cultural and spiritual meaning, also held the powdered salmon and other items the tribe used to barter with other tribes.

When the tribe was forced by Euro-Americans to leave for the reservation in central Oregon in the 1850s, the move tore at the fabric of their culture, their practices, by separating them from all that was familiar. They had to leave behind plants so valued for basket-making, medicine and other uses that prayers were spoken prior to harvesting.

During the decades after, many cultural traditions, including basket-weaving, were almost lost.

She now harvests native plant fibers, and prays and weaves.

Gold was in her 50s when she started to learn to weave.

After college, she used math skills honed at Whitman to work as a researcher in a hydraulics lab at Washington State University, then taught math at community colleges before returning to research work for state and federal environmental agencies. She also worked for the Bonneville Power Administration in Portland on projects, including a study on environmental effects of Columbia River dams.

About 20 years ago, she and a sister, both enrolled members in the Wasco Nation of the Confederated Tribes of Warm Springs, Ore., decided to learn how to weave, in part to help keep that aspect of the Wasco culture from dying. With the help of the few weavers left, and through research and studying baskets in museums, the sisters learned.

Gold’s persistence resulted in mastery. She has received numerous honors, including the 2007 National Endowment for the Arts Heritage Award in Washington, D.C., for her artwork and for her outreach efforts to teach workshops and to form a new organization of native basket weavers.

She was featured on National Public Television’s award-winning “Craft in America” program and was a consultant for an exhibit at the Smithsonian National Museum of the American Indian. Gold also directed a film about basket weavers, and her work is in public and private collections here and abroad.

In the 1990s, as she learned to weave, she saw a picture of the 1805 basket stored at the Peabody Museum and resolved to go and study it when she felt confident enough in her own weaving. When she took the trip in 1998, she found a clear connection with its maker.

“The way (the basket weaver) started at the base is exactly how I start a basket,” Gold said. To create an 8-inch base using the technique they share can take about seven hours. The total time invested can be more than 80 hours to harvest, prepare and dye the fibers and weave the basket.

Gold sometimes has to travel hundreds of miles to find the plants — tule, cattails, dogbane — she needs for fibers. Native plants have been lost to urban and agricultural development. Some on federal land are sprayed since they’re considered invasive plants.

At one time she tried to grow the plants at her Scappoose, Ore., home but eventually stopped.

“The fiber in plants that grow wild is much, much better. They’re stronger, taller,” she said.

Her parents raised their family in a cabin in the woods near Warm Springs, Ore., and taught their children respect for the Earth, including the responsible harvesting of native plants and the importance of always saying prayers of thanks. They participated in traditional ceremonies, but basket-weaving skills weren’t passed down.

Gold learned the cultural value of baskets during childhood visits to Maryhill Museum of Art in Goldendale, Wash., where her mother would point out the beautiful Wasco baskets.

Her parents preached the value of education, and although Gold didn’t know anyone from her community who went on to higher education, she planned to attend college. Her math talents were well-known, and her school adviser recommended Whitman.

She was shy, at first, finding the college environment foreign, but she dug in and tried to experience it all — took ballet, cello, studied Irish writers and, of course, mathematics.

“To this day I do a lot of reading, various topics. I don’t focus on just one thing in my life,” she said. “I think a lot of that came from taking classes at Whitman.”

About 44 years ago, she met and married her husband, Phil Gold, an urban New York mathematician who had little experience with rural outdoor activities, but the pair shared cultural similarities. His Jewish ceremonies remind her of Wasco tribal ceremonies.

He is patient when the bathtub is filled with plant fibers she’s soaking, Pat said. And he teases her that on her gravestone he’ll put the words “one more row,” because that’s what she says to him in the middle of the night when she’s still up weaving.

Gold does traditional work, but she also experiments with nontraditional materials, such as metal and plastic. She believes her ancestors — who changed with the times and added new materials when available, such as yarn from unraveled Hudson Bay blankets — would have liked that.

She also makes statements with her baskets. Images of deformed sturgeon reflect her concern about polluted groundwater that feeds into the Columbia River and threatens to impact the sturgeon, “old beings” that she said can reach 1,000 pounds and live 100 years.

In keeping with tradition, she never weaves when she’s sad.

“I believe that my feelings go into the basket,” she said. “I want happiness to go with each basket.

“Some weavers have special songs that they sing while weaving their baskets, but I am not a singer,” she said.

“But I do ‘kiss’ my baskets goodbye.” 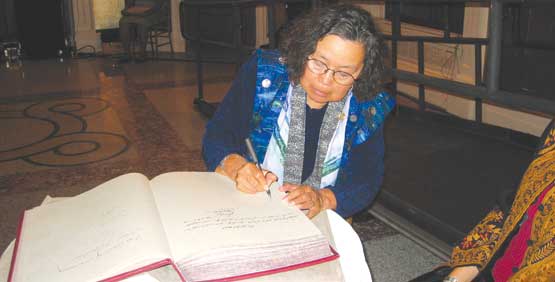 Pat Courtney Gold ’61 signs the Library of Congress book after receiving the National Endowment for the Arts Heritage Award in 2007. “I got to sign right along with the Pulitzer Prize winners,” said Gold, who drew a basket next to her name in the book.