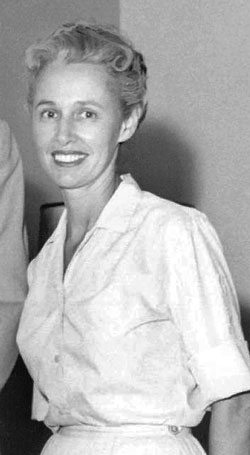 Genevieve Perry grew up in Iowa and graduated from the University of California, Los Angeles, in 1939 with a Phi Beta Kappa key and highest honors in economics. She earned a master’s degree in economics and a community college teaching credential at UCLA in 1941. While at graduate school, she met her future husband, and they married in 1942.

Genevieve was a junior economist with the U.S. Department of Commerce, and taught economics at Pomona College and Washington State University. When her husband was named president of Whitman, they settled in Walla Walla. One of the couple’s fondest memories of their years at Whitman was hosting every senior for an informal dinner at their home during the student’s final year.

Genevieve was active in the community and her church and enjoyed quilting bedspreads for her children and grandchildren.

Memorial contributions may be made to the Genevieve Patterson Perry Endowed Lectureship in Economics at Whitman. 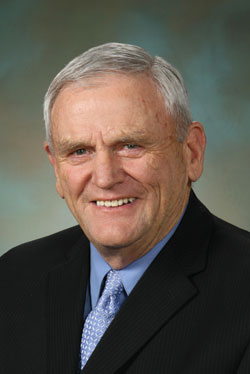 A physical education major, Grant played varsity football, basketball and track at Whitman and was a member of Sigma Chi. He married Nancy Powers ’59 in 1958, and after graduation he taught sixth grade and coached high school sports in Prescott. In 1960, he began working with his father on the family’s fourth-generation wheat farm. He remained active in farming until his death.

In 1986, Grant was elected representative of Washington’s 16th Legislative District. In 2008, he was re-elected to his 10th legislative term, making him the longest-serving representative in state history. He served 20 years on the Appropriations Committee and had been the Democratic caucus chair since 1993.

Colleagues described Grant as a down-to-earth and respected statesman, a gracious man who was known for his ability to bring people together across party lines.

Among Grant’s survivors are his wife of 50 years, Nancy, four children, 11 grandchildren and niece Monesa Grant ’81.