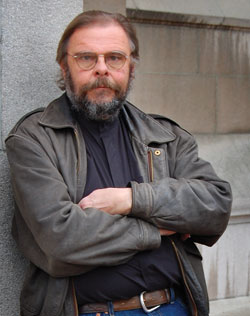 Polluted watersheds and melting glaciers draw the attention and camera lens of Mark Abrahamson ’66, an environmental photographer who documents the effects of mining, poor land-use practices and global warming from the air.

Abrahamson, the Alumni Association’s 2009 Alumnus of Merit, spends countless hours researching environmental issues before he ever shoots a picture from his lofty perspective in an aircraft.

In Montana, he captured yellow, orange and deep red toxins in open-pit copper mining in his print “Butte 5.30.2001.” In New York, Seattle and Chicago, he exposed the slowly decaying urban environments along the Hudson, Duwamish and Chicago rivers. More recently, he has focused on receding glaciers in Alaska and the North Cascades.

The former dentist was involved with the politics of land-use planning and watershed restoration issues in Washington State for several decades. Eventually, he realized he could accomplish more by using his passion for photography to show — rather than attend endless meetings to inform — people about environmental degradation.

“The power of photography is that the pictures work on an aesthetic level, though the aesthetics become horrifying when observers realize they’re looking at pollution,” Abrahamson told The Seattle Times in a 2003 article about his “Montana Legacy” exhibit documenting land damaged by copper mining and overgrazing.

In 2006, Abrahamson retired from his dental practice and expanded his study and photography of water issues to the larger interconnected problem of global warming. He realized that almost all his images of watersheds were relevant to the discussion of climate change. His newer images of melting glaciers complete the picture, and he put together what he calls a “global warming traveling show,” now speaking frequently at universities, art centers and corporate venues across the country. His presentation helps define the problem; his imagery illustrates the crisis. It’s urgent, he said, to educate people about global warming.

“A lot of people, especially folks my age, don’t understand the global warming issue,” Abrahamson said. By contrast, the students whom he encounters at colleges and universities are generally well-informed, and he is encouraged by the “dynamos” he believes will be “tomorrow’s leaders.”

“This past winter the Pacific Northwest became a model for future decades as our climate changes,” Abrahamson said. “Violent storms, heavy snowfall and rainfall, the ‘pineapple express,’ extreme cold, 100-year floods and, finally, drought and reduced snow pack in the Cascade Mountains illustrate the crisis.”

Abrahamson believes that part of the way out of the current economic crisis is through the greening of America. “We need to change a lot of things … develop renewable energy, rebuild our infrastructure, simplify our lives and rethink how we look at transportation,” he said. Investing money on environmental improvements in the “long term is going to help the country in all kinds of ways.”

Of all the honors he has won for his photography, Abrahamson said he is most moved by this Alumnus of Merit award. “Attending Whitman is one of the best decisions I’ve made in my life,” he said. He’s supported the college in many ways, including serving as a class representative and participating in the Alumni Career Series.