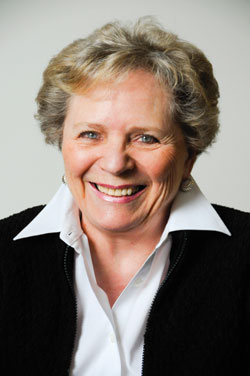 When Nancy Bell Evans ’54 graduated from Whitman, she couldn’t have imagined that slightly more than a decade later she would be Washington’s first lady — at age 31, the youngest in state history. Nancy’s husband, Dan Evans, served three terms as Washington State governor (1965-1977) and one term as a U.S. senator (1983-89).

While the media chronicled Mrs. Dan Evans’ fashion apparel, Nancy was already building an impressive career in public service, in addition to her work as a homemaker — she insisted on doing her own grocery shopping — and mother of three.

The Whitman Alumni Association, recognizing Nancy Evans’ ability to inspire others through her volunteer efforts, and her significant contributions of time and energy to the college over more than three decades, has awarded her the 2009 Gordon Scribner Award.

Nancy attributes her passion for politics and philanthropy to her mother’s influence, her family’s dinner table political discussions, her parents’ expectations that their children do good works and her husband’s support in all her endeavors. Other keys to her preparation to be first lady came from her Whitman experience: as a scholarship student she learned how to budget her time between work and school, and as a music major she developed the background that informed her leadership role in the Seattle arts.

For 50 years, Nancy Bell Evans has been a tireless civic and philanthropic volunteer, bringing energy, grace and passion to public service.”

She realized early on that she had a “bully pulpit” in her role as Washington’s first lady. “I had a voice, and if I used it appropriately and wisely, I might have a positive effect.”

And clearly she has.

The former elementary school music teacher helped form a concert series in Olympia and is active on the boards of the Seattle Symphony Orchestra and Benaroya Hall Music Center, as well as other organizations. She created the docent program at the Washington State Capital Museum and has been a lifelong activist for the developmentally disabled and mentally ill.

Perhaps her most personally satisfying accomplishment involved preserving the historic governor’s mansion for future generations by creating the nonprofit Governor’s Mansion Foundation in 1972. Nancy said that it was “out of desperation, really” that she began the quest to fund maintenance and renovation for the home, which had already fallen into disrepair by the time the Evans family moved in. The maintenance budget for the house was “slim” and funding it was “always a political issue in the Legislature,” she said. In what she calls an “aha” moment, she realized it was going to take private money to preserve the historic home.

She “stumped” across the state for funds to purchase furnishings and accessories from the late 18th and early 19th centuries, and today the foundation maintains and furnishes the public rooms of the mansion with authentic heirlooms.

Nancy also has invested more than 30 years of service to Whitman, beginning with her work as an overseer from 1973 to 1988, an overseer emeritus until 1994 and as a trustee until 2008, when she was named trustee emeritus. She has been an active fundraiser for the college, and she served on the search committee for the current president.

“I have grown so much out of my association with the overseers and trustees. They are people from whom I have learned much,” Nancy said.

Her ongoing devotion to the college began with appreciation for the scholarships that allowed her (and many students since) to attend, and grew with an admiration of the people who “treated me so beautifully” and the “wonderful friends” she found.

The relationship was truly cemented “on a very personal level” when she returned for her 10-year reunion in 1964. Her husband’s first campaign to become governor was “still relatively young,” and without benefit of modern technology, it was a grassroots campaign with lots of volunteers, 3-by-5 cards and doorbelling to get the word out.

As she and her husband drove into Walla Walla for the reunion, they saw “Dan Evans” bumper stickers and yard signs everywhere. At a reunion party at a classmate’s home, signs proclaimed the same. “The Whitman community didn’t know Dan. They only knew he was married to a Whitmanite,” she said. “That support carried us through,” she said.

Now more than 40 years later, she is “delighted and surprised” to receive the Gordon Scribner Award. “I knew Gordon (a 1942 alumnus, former dean of students and alumni director) when he was at Whitman and liked him very much. He is a wonderful person and contributed so much to the college. I feel very proud to receive this award given in his name.”