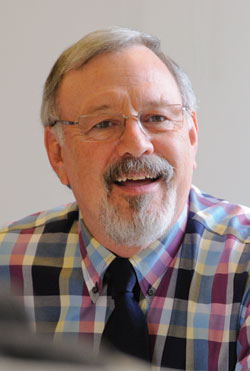 Like many Whitman faculty, Professor of Rhetoric and Film Studies Bob Withycombe believes his job does not stop at the boundaries of the classroom or the campus. In the same way, his interaction with alumni isn’t limited to trips or organized lectures.

Withycombe, who has been involved in alumni events since shortly after he arrived at Whitman in 1980, has accompanied alumni to Philadelphia, lectured at several Summer College events, participated in the “Vashon Alumni Olympics,” and coordinated a speech and debate reunion.

For these efforts and many more, the Alumni Association has presented him with its 2009 Faculty Award for Service.

“Many of my former students remain great friends — in many ways, they’re extended family,” said Withycombe, who sleeps on a blow-up bed when he visits alumni friends on travels to Washington, D.C., meets them for dinner when he visits their hometowns or cooks up a spicy pot of jambalaya to share when they revisit Whitman.

Piled neatly on his desk in Hunter Conservatory are stacks of letters of recommendation and references he’s written for alumni. His e-mail inbox receives a steady stream of communication from former students seeking his reaction to and interpretation of everything from Supreme Court decisions that affect First Amendment rights to the election of America’s first African American president, and how that will affect the way Withycombe teaches about America’s race issues.

“I take time to respond because I’m thrilled they’re still interested in what we discussed in class,” he said. His relationships with alumni are the “logical off-shoot of what happens in the classroom.”

The idea for the 2005 trip he led to Philadelphia, “Discovering the Constitution: The Great Debates,” sprang from a classroom discussion about the success and failings of the Constitution. “The document is brilliant and the debates over its ratification were impressive, and yet there were so many unresolved controversies.” One of the highlights of the trip, Withycombe said, came when an archivist at the American Philosophical Society let them all hold one of the original Lewis and Clark journals. “I don’t care how old you are, to look at an original” was a profound moment.

Perhaps his favorite part of spending time with alumni on trips comes at the end of the day with the opportunity to “sit around the table with people who are bright and healthy and smart and want to learn more.” When they come to that table as the embodiment of lifelong learners, they enrich each other, and Withycombe also reaps the benefit of their knowledge and insights, because they frequently have lived the experiences he has only lectured about.

Withycombe, also the recipient of the 2000 Thomas D. Howells Award for Distinguished Teaching in the Humanities and the 2002 Town-Gown award for community service, is “exceptionally honored” by the Alumni Association award and feels rewarded by his interaction and relationships with alumni. “It’s the fun part,” he said. And the altruistic one: “We keep learning because it’s all good.”