A renewed call to service 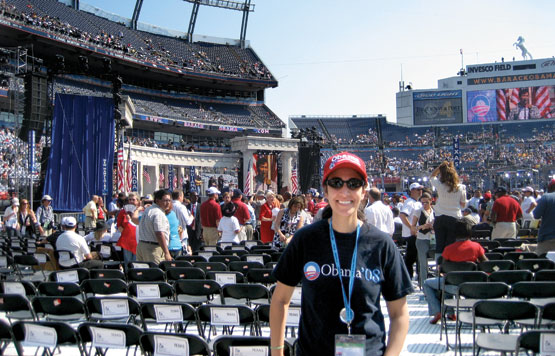 Saluja at Invesco Field the day Barack Obama gave his acceptance speech at the Democratic convention.

On Jan. 20, 2009, on the island of Maui, I sat in my hotel room at 6 a.m. watching the historic inauguration of Barack Obama. Like millions of Americans, I was filled with feelings of pride, joy and hope as America embarked on a new chapter in our nation’s history. As I watched, I could not help but think about where I was one year ago and reflect on the life-changing journey I began: to help elect our next president.

After Obama won the Iowa caucus in January 2008, I decided that I needed to personally invest my time in making a difference in changing the direction of our country. I have always had a love for and interest in the political process. I graduated from Whitman in 1992 with my degree in politics. I left Whitman hoping that I could help positively influence our political process so that it actually improved the lives of others. After briefly working for a U.S. senator, I moved into the private sector, working for Microsoft for the last 13 years. I had never been directly involved in a political campaign.

Now, as a working mother of two young boys, I felt there was too much at stake for the future of our nation and our children. I chose to support Obama as I believed in his vision for America and felt he represented a change from “politics as usual.” My husband and I started a local group in North Seattle to get others involved in the campaign. Not long after, we became organizers for the February Democratic caucuses in Washington State and found ourselves knocking on doors, registering voters and connecting with many new people in our local community. 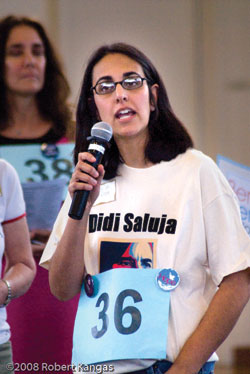 Saluja gives her speech to be a national delegate at the Democratic National Convention in Denver.

This was grassroots organization in its purest form. The experience of reaching out to fellow citizens to learn about their beliefs, whether shared or different, in the hopes of improving our government was empowering. Our efforts in doing so contributed to a caucus victory for Obama in Washington State. From this experience, I was reminded how, despite different backgrounds, opening a dialogue with your neighbors can bring a community together. My involvement at the local political level later catapulted me into the role of national delegate from Washington State for Obama to the Democratic National Convention in Denver.

My participation in the convention was an experience that I will never forget. The journey from knocking on my neighbors’ doors to signing the historic ballot to elect Barack Obama as the Democratic nominee was a humbling experience. After years of studying the system, I, as an ordinary citizen, was now actively participating in our political process. I was inspired and overwhelmed to see that our democracy did work from a local level to the national level. The convention validated my belief that each and every one of us has the ability to make a difference.

The convention was not about the delegates, the celebrities or the politicians making the speeches. Instead, the convention reaffirmed the belief that ordinary citizens can successfully organize, collectively work together toward a common cause and are empowered to make change. During the delegate roll call vote, I proudly voted on behalf of the citizens of Washington State who were supporting Obama. I was overcome by emotion as I contemplated the significance of what I was doing. As the daughter of immigrants from India, it was personally meaningful that we were electing the first person of color and a son of an immigrant to be the nominee of a major political party.

But, more importantly, this moment signified how far we have come as a nation and that every individual in America has the opportunity to achieve the American dream, regardless of his or her background. The act of nominating Obama to be the nominee for the Democratic Party was thought to be improbable. The grassroots support, enthusiasm, desire for change and strong engagement in our democratic process from ordinary citizens carried him to the nomination.

Days before the election, I decided to travel to the battleground state of Nevada to campaign. It was there that I fully recognized the importance of volunteering and the power of one. I recall driving into a rough, lower-income neighborhood feeling a bit nervous and wondering whether I would be welcomed. As I walked up and knocked on the door of a trailer home, the woman who opened the door warmly greeted me. The elderly Vietnamese woman thanked me profusely after I provided her directions to her local polling location. She explained to me that no one had ever come out to her home encouraging her to vote because her vote “never really counted” or “made a difference.”

The experience of reaching out to fellow citizens to learn about their beliefs, whether shared or different, in the hopes of improving our government was empowering.

But in 2008, it did. On Nov. 4, as I sat in an Obama headquarters location in Seattle, I watched with tears in my eyes as NBC pronounced Barack Obama the 44th president of the United States. At that moment, I reflected on how this historic victory was delivered simply on the cumulative actions of thousands of individuals, united in their desire for improvement. And when citizens unite for a common goal, the possibilities of what one can achieve are limitless. The inauguration of Barack Obama was not just the inauguration of an individual but also the inauguration of an idea. The idea that getting involved, being engaged and volunteering your time toward a cause can make an impact and influence change in our communities and our nation.

My experiences at Whitman certainly filled me with a strong sense of civic responsibility and ignited my passion and desire to contribute in some capacity. My involvement in this modern movement for change has led me to rediscover and re-prioritize what is important to me in life. As we look ahead during these troubled economic times, we should remember that all of us are in this together and that bringing our communities together makes us stronger. When each and every individual contributes their time, regardless of how much or how little, we build stronger communities and there is nothing we can’t conquer together.

I encourage each of you to follow the president’s call to action by volunteering your time toward a cause you are passionate about. Like me, you may begin a personally gratifying journey that will inspire you to make community involvement a lifelong commitment.

Didi Manhas Saluja ’92 is principal human resources consultant for The Madavi Group. She lives in Seattle with her husband, Sunil Saluja, and their children Raj, 5, and Ravi, 2.