For weeks, the days would start the same way. At dawn, the music would start and Kate Greenberg ’09 would wake up. But this wasn’t a residence hall.

This was rural Ecuador, the site of a faculty-led study abroad experience, in a bedroom her host parents had vacated for her while they stayed with their three children in the other room in the family’s concrete-block house. Sometimes the wind would find its way through holes and seams between the windows and walls. Many nearby homes had dirt floors, but theirs had a concrete floor and a tiled kitchen counter. The house, built by her host father, was lovingly tended. 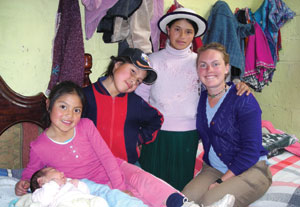 Kate Greenberg ’09, seated at right, is shown with her Equador host family, from left to right, baby Kusikayu; Pacari, 7; Franklin, 10; and mother Lucinda Quintuña, in the house that host father Santiago Quintuña (not pictured) built.

At dawn, the music would roar to life, coming from the other side of the patio in an outbuilding where her host father, Santiago Quintuña, 27, a musician with an Andean-fusion band, would enjoy some early morning music time, listening to the stereo before going on to his farm work and involvement in the community’s development of cultural tourism.

He and his wife, Lucinda Quintuña, 27, love their community and didn’t want to migrate abroad to provide for their family, and so they have worked hard to develop cultural tourism in the Cañar area. Greenberg, welcomed as a member of the family, participated in it all, work and fun, an important part of her course-required research. For her research topic, Greenberg chose community tourism — how tourism may affect the Cañari culture.

“I was blessed with a wonderful host family,” said Greenberg, an environmental studies and humanities major from Minneapolis, Minn., whose main traveling experiences previous had been annual resort vacations with family. “Our lives look so different. But we were able to talk and listen to one another; we built a bond.”

There are many types of study abroad experiences. For this one — five weeks in Ecuador — Greenberg wasn’t alone. “Whitman” came with her, both in faculty and curriculum. And nine classmates lived in other homes, experiencing everyday life there and compiling data for research projects.

These short-term faculty-led trips are possible through the planning and commitment of faculty, many of whom are involved in the college’s Global Studies Initiative, and through funding from such sources as the Innovation in Teaching and Learning grants and the David Deal China Exchange Endowment.

Recent trips include the one Greenberg participated in, which was planned and led by Suzanne Morrisey, assistant professor of anthropology, and Jason Pribilsky ’93, associate professor of anthropology, who have been conducting research in Cañar for a number of years. Students executed their own ethnographic research projects and prepared their written findings. The theme was “Globalized Livelihoods: Health, Nutrition, and Migration” in which student immersion in the culture was key.

Another recent faculty-led trip had an interdisciplinary twist: Heidi Dobson, professor of biology, and Brian Dott, associate professor of history, teamed up to create a lecture course linked to a separate spring break field course to China, where they and eight students followed the Silk Road. The field course was designed to connect scientific, environmental and cultural conditions related to the historic trade route and give students a more in-depth understanding of both the lasting influences and the modern changes. 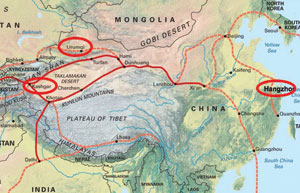 Whitman has “an enormous amount of talent in our faculty,” and the faculty is interested in interactive learning, said Susan Holme Brick, director of international programs. These trips enable them to create “a field trip built into a course” — making it “more directly linked to the Whitman curriculum.” Faculty and students learn together “about a subject in a very focused way,” she said. These shorter trips are accessible for students who because of extracurricular activities or conflicts with their coursework are unable to break away for a whole semester or year to study abroad, she said.

Dobson, who had wanted to teach an interdisciplinary Silk Road class for years, said one goal was to help students realize the interconnectedness of the world through trade prior to the Modern Age. The traveling class started in Beijing and as they moved west by plane, train and bus, students were able to identify and explore influences from India in the art and religion displayed in ancient Buddhist caves, Turkish influences in language and food, and Arabic influences in the writing, all reflecting cross-cultural exchanges, which characterize Central Asia.

Dobson and Dott were able to explain environmental reasons for trade transactions. Example: The steppes and grasslands of Central Asia are the natural habitat of horses and were a better area to raise them than central China. That’s why the peoples of these areas were nomads whose lives revolved around horses, and why silk growers from China’s more southerly moist and warm regions, where sericulture thrived, obtained horses for power and warfare by trading silk.

“The learning was a lot more effective,” said Dobson, about hands-on aspects that allowed students to integrate biology, religion, history, geography, politics and social environment. “It was one of the most fun classes I’ve been involved with.”

Alex Ponnaz ’11, one of the students in the Silk Road course, said courses like it “provide perspective you simply cannot get through reading books.” Ponnaz, a religion major who plans to propose an individually planned major in Middle Eastern studies, said his focus is history, but he appreciated the interdisciplinary aspect. Dobson’s “immense knowledge of the natural world only added to the course,” he said. It also was a rich experience as the group explored far-flung areas where the “cultures were a world apart from the one in China proper.”

The ethnographic research methods explored in the Ecuador trip included the participatory model. “You learn as much from participating in the community as surveying, interviewing and focus groups,” Pribilsky said.

Students were expected to immerse themselves in the family, learn the rules and patterns in the household and take voluminous notes. The professors and students hope to repay the community for its generous hospitality by providing completed research that will enhance local grant proposals to the government on various projects. Pribilsky wants to “build a bridge” between Whitman and Cañar.

Greenberg discovered through her research that though she had been concerned the Cañari culture might “morph” to meet tourist demands or be otherwise adversely affected, no one in the community shared her concern, seeing instead the economic benefits and opportunity to keep the culture alive. She realized that what she had wanted was for the community to be static. “I had a certain notion of what (indigenous) should be … It was me who wanted them to stay indigenous … I wanted the continuity,” she said.

Her Cañar family had a computer but no Internet at home. Greenberg played Barbie with her host sister and baseball with siblings, and she interpreted as they’d watch an English-language “Transformers” movie. From their house on the main road from Cañar to the ancient ruins of Inga Pirca, Greenberg could hear bulls bugling and public buses zooming by. She shadowed Santiago on errands — collected paint supplies for the new tourism restaurant, joined tours or attended events organized by her professors and Los Chaskis, the indigenous partner organization to which her host parents belong.

And she ate. “I’d almost always leave the table in a satiated stupor,” she said. Cañari families often ate potato soup three times a day. In addition, breakfast would have instant coffee and possibly sweet rolls. Lunch, the biggest meal, was often popcorn, fava beans and fresh papaya juice — and then potato soup and then a heaping plate of spiced vegetables and white rice (normally barley, but their crops were wiped out in heavy rains). Greenberg wants to incorporate in her life the sense of ease in the Cañari culture. “They work really hard,” but the pace of the day is different, she said. And even though the family lives in a global world, she learned how important the local community is to them. “Travel is an amazing opportunity but if we only have our sights set on being global, we’ll lose the local.”

She learned the importance of “building up where you are,” instead of just focusing on being a member of the whole world.

“They love their place,” she said. “It inspired me to do the same. It taught me that I have to ‘live’ where I live.”