The world’s cultures and societies bleed into each other and remain intrinsically and incontrovertibly connected. Whitman professors know this.

They understand that in this era of rapid globalization it is even more essential that courses of study address historical and contemporary interconnections to enable Whitman students — future humanitarians, teachers, diplomats and business people — to interact effectively and meaningfully with people from all corners of the world. 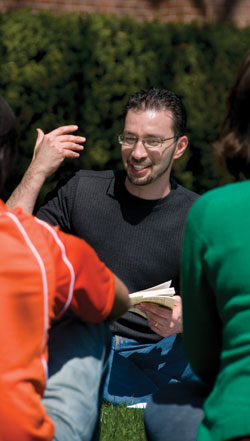 In the last couple of years, a group of professors — when they were not teaching, researching or serving on college governance committees — spent many of their “off-hours” meeting in living rooms and local establishments to work on a three-year plan, a Global Studies Initiative that eventually was launched with a $345,000 grant from The Andrew W. Mellon Foundation. The funding provides comprehensive faculty development among other opportunities. Through it, professors are learning from each other and from cross-disciplinary texts. They are examining existing global studies programs and interdisciplinary courses, with the goal of creating new courses to enhance Whitman’s curriculum.

“A good liberal arts education must include global education,” said Shampa Biswas, associate professor of politics and director of global studies. Whitman graduates can expect to teach in public schools with an ever-greater global diversity, work at banks and corporations with global clients, conduct scientific research with colleagues from around the world, serve in the Peace Corps and armed services, and work with nonprofit organizations on vital issues of global importance, such as HIV/AIDS, global warming, energy and poverty.

Whitman is already known for developing “strong, broad and rigorous thinkers.” The deepened focus on global issues made possible through the initiative will foster even more “strong global thinkers who are prepared to deal with the profound challenges of a connected world,” Biswas said.

For the faculty, the initiative’s seminars and workshops “will be like going back to graduate school; this opportunity to have an intense semester-long intellectual environment to read closely with and be pushed and challenged by some very smart colleagues is truly exciting,” said Biswas. 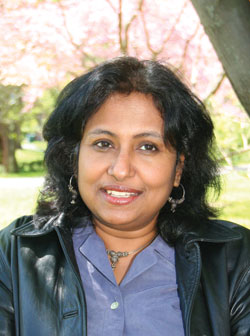 “Many of our disciplines are being reshaped in global directions, and the Global Studies Initiative allows us to catch up with some of those changes. Ultimately, we all hope to be more effective teachers, with loads of fresh ideas and insights,” which will enhance the student experience, she said.

Ryan Crocker ’71, recently retired from a storied diplomatic career, his last post as U.S. ambassador to Iraq, agrees with Whitman’s faculty that global education is essential. He credits his Whitman liberal arts education with equipping him for his Foreign Service career, and during his Commencement address he lauded the Global Studies Initiative, which he said “promises to take this college to a new level in international affairs.”

When he was a student at Whitman, the world was in the midst of the Cold War, he said. Because of the balance of the two powers, it had a level of stability that it doesn’t have today. “In the post-Cold War era, in a non-polar world, regional peculiarities, tensions and phenomena create conflicts and challenges in ways that are not predictable if you’re not schooled in a global environment.”

At Commencement, he told the 2009 graduates, “I know that most of you will not specialize in the international arena, but all of you will be informed and affected by it wherever and however you engage.”

“Globalization has a very long history,” Biswas said. “The nation-state is a fairly modern concept. But the nation-state itself is a global concept. It is not uncommon for people to think of ‘the global’ as ‘out there,’ outside the boundaries of ‘our nation,’” Biswas said. However, “every nation-state, including the United States, has emerged in and out of global currents. Global studies is not simply about studying ‘other cultures,’ but about understanding the larger dynamics through which cultural difference within and outside current nation-states emerges and exists.” 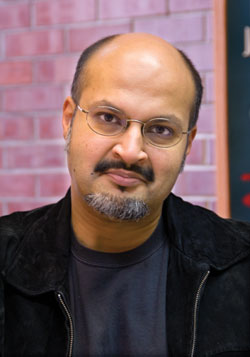 For instance, you can’t understand U.S. politics and culture, Biswas said, if you don’t study such altering events as the transatlantic slave trade, the long patterns of immigration from Europe and Asia, the U.S. role in World War II and the liberal world order that emerged during post-war reconstruction, and then recognize how elements of these events are embedded in this country’s contemporary culture, in its literature, in its multiple understandings of itself.

Global awareness on campus is important “if we aspire to precision in our teaching,” said Gaurav Majumdar, an assistant professor of English who teaches 20th century British literature, among other courses, and is a steering committee member for the Global Studies Initiative.

He said sometimes disciplines such as literature have been taught at colleges “in a way that didn’t overtly address the international currents of literatures … the circulation of language and ideas.” It’s important to learn that national literature “didn’t happen spontaneously within national boundaries,” Majumdar said. If that isn’t addressed, “we’re forgetting about the international exchange … and that produces misinformation instead of information.”

The effort will help students recognize even more that “they aren’t living in an invulnerable national bubble that floats over, and controls, the world,” Majumdar said. “And in the current worldwide recession, recognition of co-dependence and global dialogue becomes even more important.”

In 2005, before even attempting to write a grant proposal for this initiative, faculty invited a speaker from a college with a long-established global studies program — Ahmed Samatar, dean of the Institute for Global Citizenship at Macalester College — to talk about the nuts and bolts and challenges of organizing such a program. The faculty then began a two-year process to create a grant proposal. It took multiple drafts, which were sent to many sets of eyes and people with contrasting views across campus.

It’s expected that by the end of the three-year Mellon grant, about half of the Whitman faculty will have attended seminars and workshops to study “globalization through a variety of disciplinary lenses,” according to the grant proposal.

To do that, about eight faculty members will attend a semester-long seminar on campus in fall 2009, and then half of them will share that information with colleagues in workshops the following summer. Meanwhile, the other half will use what they learn to collaborate with other professors to create interdisciplinary courses. That schedule will be repeated each year, bringing on board more and more faculty members and more new or revised courses. Examples of possible new courses: “Globalization and Health,” “Global Pandemics in Science and Culture” and “Literature and Politics of Empire.” Faculty members also will produce working papers and lead discussion groups for annual campus-wide symposia featuring prominent visiting scholars — the first of which was held earlier this year. 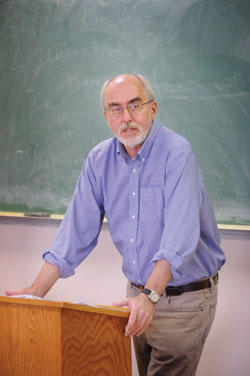 “Neither national borders nor disciplinary boundaries will confine the challenges that students and all of us will face in the coming years. The Global Studies Initiative will help us as an intellectual community to grapple with the relationship of globalization to the liberal arts in the world in which we teach and learn. It will provide the resources and the intellectual space for us to develop new courses that explore global issues across traditional divisions and disciplines, as well as to rethink and retool some of our existing courses in a more global context.”

As part of the initiative, the steering committee and other faculty are actively seeking additional funding sources to expand foreign language offerings, enhance study abroad and international student/faculty research opportunities, and bring more international students and scholars to campus.

Biswas is quick to point out the many Whitman programs already in place that emphasize global awareness: study in six foreign languages and study abroad; opportunities for prestigious international fellowships; and interdisciplinary programs in Asian, Latin American, and race and ethnic studies. The number of international students on campus has increased steadily. The Ashton J. and Virginia Graham O’Donnell endowment, which for the past several years has brought to campus renowned speakers with international experience and expertise, is now under the umbrella of the Global Studies Initiative.

Many professors at Whitman, in a wide variety of disciplines and fields, already incorporate global material into their teaching, Biswas said. This initiative “allows us to talk with each other much more systematically about the different ways we already do global studies here, how we can do it better and how we can do it collaboratively.”

Jim Russo, an initiative steering committee member and associate professor of chemistry, said the initiative is important to him because his area of focus — biochemistry and infectious diseases — “is centered on preparing students to be practitioners and researchers in the biomedical sciences and public health.

“Problems in these areas span borders and are created or exacerbated by global issues of travel, migration, poverty, food production, and nutritional deficiencies and excesses. For example, my infectious diseases course next fall will engage students in an interdisciplinary approach to address malaria, tuberculosis and HIV, diseases in which the vast majority of the mortality and morbidity resides outside the United States,” he said. “In addition, we will examine and monitor the global transmission of the H1N1 influenza (swine flu) virus that surfaced in the spring and mutations that could increase its virulence. The depth of understanding of these critical public health issues is greatly enhanced by a campus-wide curriculum in which students can probe the global economic, political, cultural and social forces that make these diseases such a critical public health problem,” said Russo, who also serves as Whitman’s health professions adviser.

“Many of our students will serve as clinicians outside of the United States or treat patients who have immigrated to the United States from around the globe. Cultural competency is essential for clinicians in disease treatment and prevention, and a vibrant global studies curriculum can best prepare students to practice as nurses, physicians, public health specialists or any health professional serving a diverse patient population.” 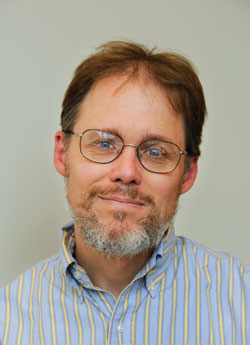 “The Global Studies Initiative is important to me since my area of focus in the BBMB program (biochemistry and infectious diseases) is centered on preparing students to be practitioners and researchers in the biomedical sciences and public health. Problems in these areas span borders and are created or exacerbated by global issues of travel, migration, poverty, food production, and nutritional deficiencies and excesses.”

A kick-off event for the Global Studies Initiative was held in fall 2008; it was a forum on “Persepolis,” a memoir about author Marjane Satrapi’s childhood in revolutionary Iran that was required summer reading for first-year students. Satrapi came to campus to speak in April 2009. (See story, Page 27)

The inaugural Global Studies Initiative symposium, held in February 2009, focused on torture, approaching a critical contemporary issue in an interdisciplinary way with outside experts discussing the topic from historical, legal and ethical perspectives. (See story, Page 26)

Biswas said in her opening comments at the symposium that “the public purpose of the university is to elevate the level of public discourse in a society, and do so in ways that matter. … to deepen and broaden our conversations — across disciplines and specializations, across the scholar-practitioner divide.”

The symposium was a “spectacular success,” she said, noting that Whitman students who made presentations “emerged as full intellectuals.”

Now on to the next step: preparation for the faculty’s first fall global studies seminar and each participating professor’s journey to become a “different kind of teacher.”