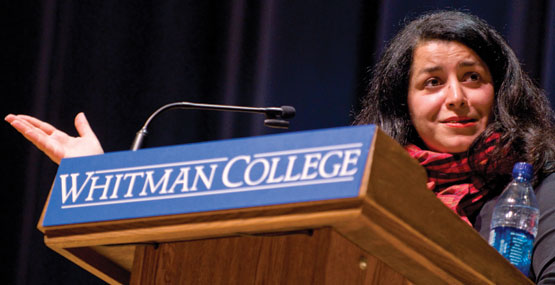 Marjane Satrapi, author of “Persepolis,” lectured at Whitman in April.

The very first assignment for first-year Whitman students in 2008 happened during the summer — a pre-official start to the academic year:

Get to know one Iranian child through a special book.

Its comic-book-like strips of black-and-white illustrations provided a potent entrée into the stark realities of a child from Iran, and thus the book served as a launching pad for learning through the college’s Global Studies Initiative. 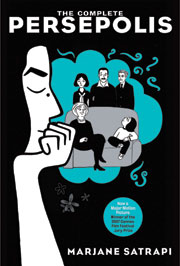 “The Complete Persepolis,” a memoir by author Marjane Satrapi, a graphic artist who drew images of formative years spent in Iran and Europe, gave these new Whitman students the first of many opportunities to wonder, evaluate and open their world to additions, alterations or confirmations of their views.

“How to relate to cultural otherness, and how to relate to difference, more generally, are questions that concern, or should concern, all Whitman students,” said Zahi Zalloua, associate professor of foreign languages and literatures, French, who recommended the summer-read book. “Exposing students to these questions their first year allows them to cultivate a greater interpretive sensitivity to such global issues.”

The autobiographical novel tells the story of a young Iranian girl growing up in Tehran during and after the 1979 Islamic revolution, her high-school experiences as a young immigrant woman away from home and family in Vienna, her bittersweet return to Iran in the late 1980s and her final departure for France in 1994.

The author’s illustrations sting: Some show the emotional effects for the young Satrapi; others evoke the simple human sweetness of love of family, culture and home even in desperate and difficult times.

“The book is a reflection of an incredibly complicated world,” said Elyse Semerdjian, associate professor of history and a panelist for a fall discussion of the book open to the college community and general public. Satrapi’s book, its personal focus, helped readers build a connection with her — to “laugh and cry with her,” Semerdjian said. 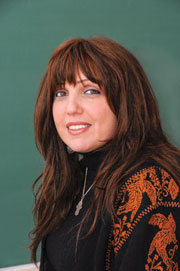 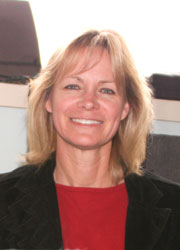 Another panelist, Kendra Golden, associate professor of biology, said it was a meaningful experience for her as a microbiologist representing Whitman’s mathematics and science division, to have­ — in a discussion with faculty members from the social sciences and humanities about a book such as “Persepolis” — “a legitimate place in the larger context of the liberal arts.”

Golden teaches, among other topics, a nutrition course, and has given public talks on such issues as body image, societal expectations and eating disorders. She said Satrapi, while growing up in the political turmoil, “in the midst of it was still going through what a girl goes through.” Readers from other parts of the world could relate to that, and Golden advised the audience at Cordiner Hall, which had many first-year students in attendance, to “be true to who you really are … project who you really are.”

Zalloua believes the comic book medium “does more than simply illustrate Marjane’s story — graphics help tell the story, merging with text in a form that exceeds the sum of its parts.”

“Deploying this medium to call attention to the framing of difference, Satrapi makes the twin problems of assimilation and exoticism central to the book’s analysis and critique,” he said. “Reading ‘Persepolis’ as a graphic novel means first being attentive to the double function, or rather, double potential, of comics: on the one hand, comics’ reputed accessibility and, on the other, its ability to break with the familiar. It is this tension between universal appeal and startling defamiliarization that I find most original in Persepolis.”

Satrapi, who spoke at Whitman in April, has said, “The only thing I hope is that people will read my book and see that this abstract thing, this Axis of Evil, is made up of individuals with lives and hopes.”

Kirk Crosland ’12 said the book gave him “common things to talk about with other students.” They’d meet in the residence hall and discuss it. And in reading Satrapi’s experiences, despite the cultural differences, “I could identify with things in her life.”