Students called her Wei laoshi. Laoshi is the Mandarin Chinese word for teacher. Shu-chu Wei-Peng, John and Jean Henkels endowed chair of Chinese languages and literatures, taught classes in Chinese language, literature and theater, and was instrumental in developing the Whitman Summer Studies in China program. 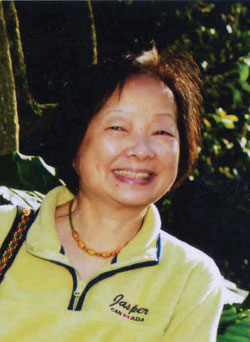 Fondly known for her enthusiasm and sense of humor, as well as her knack for explaining Chinese characters, Wei-Peng ends her teaching career with 24 years of service to the Whitman community.

When she first came to Whitman in 1985, Wei-Peng recalled, it was long before most current students had been born. Each year since that time, she has seen the college improve and expand, and values her role in its collective achievement.

“I enjoyed my time, almost a quarter of a century, and cherish my experience. I am thankful that my son (Meng-Huai Peng ’98) and I have been and will always be members of this great — and, more importantly, lovely — college.”

Wei-Peng also praised the open-mindedness and dedication of Whitman students, whose ability to interpret Chinese classical texts “proved that cultural gaps can be crossed.”

Wei-Peng earned her bachelor’s degree in English from the Tunghai University in Taiwan, her master’s degree in English from the University of Hawaii, and a master’s degree and doctorate in comparative literature from the University of Massachusetts, Amherst. A member of Whitman’s department of foreign languages and literatures, she served as its chair as well as director of the Asian studies program, and participated on the President’s Council on Diversity and the Whitman in China Committee.

Wei-Peng was “largely responsible for designing the Whitman Summer Studies in China program,” said Susan Holme Brick, director of international programs. In fact, Wei-Peng co-authored the textbook used during the six-week summer class. “The conversational Chinese textbook is custom-designed for Whitman students,” Brick said. It incorporates what students learn in the Chinese language program at Whitman with local vocabulary in Kunming, China.

“Shu-chu has truly been a model colleague and teacher,” said Celia Weller, professor of Spanish. “She has mentored many, many students, and has seen them carry on their interests in graduate school.”

“Shu-chu was always generous to me, to her other colleagues and, especially, to her students,” noted Dana Burgess, professor of classics.

Lydia Ngai ’11, who took courses in Chinese language and poetry from Wei-Peng, commended her teaching style and ability to connect with students. “She’s quite light-hearted and jokes around, which is really nice. I love how she taught Chinese characters because she wouldn’t just teach us how to pronounce the words or how to write the characters, but she’d also help us memorize them by explaining the different parts within the character,” said Ngai.

Thu Tran ’11, an international student from Vietnam, found Wei-Peng easily approachable and enjoyed speaking with her outside of class about her home and family.

“She is a small woman but she has a great energy,” Tran said. “She can wake you up in the early morning when all of her classes are held. Chinese lessons with Wei laoshi are so much fun because of her great sense of humor. She also knows a lot about Chinese culture, and she knows how to explain it in the simplest way … I’ll remember the characters she taught forever.”