For more than a century, the Pioneer weekly student newspaper has informed and entertained Whitman students during the academic year. The current crop of students is taking this communication source to a new level with a nationally acclaimed Web site redesign that features blogs, a podcast, student forums, videos, links to social networking pages, polls and photo galleries. 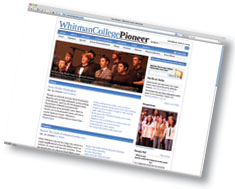 The Pio Web site earned “Best of Show” honors at the annual convention of the Associated Collegiate Press. A panel of professionals judged Web site entries on general design, navigation, writing/editing, content, graphics and interactivity. Whitman’s site edged out the University of California, Berkeley, and the University of Miami, among other larger schools.

The Web site redesign and several Pio staffers’ attendance at the 2009 ACP convention in San Diego, Calif., were made possible by a gift from Megan Salzman Medica ’81 and John Medica.

Pio editors-in-chief for the 2008-09 year were Kim Sommers ’11 and Jamie Soukup ’10. Sommers will continue in that role this fall.

The Pio staff is on hiatus during the summer, but check out the site at www.whitmanpioneer.com in the fall.