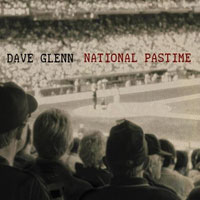 Listen to tracks from the CD
"National Pastime"

"The Denizens of Rathskellers" 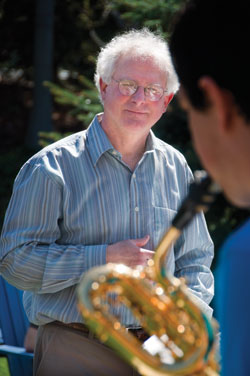 Essayist and educator Gerald Early once noted: “The three most beautiful things Americans have ever created are the Constitution, baseball and jazz.”

In his latest recording project, Professor of Music David Glenn has married two of those graces. In May, the composer and trombonist released his own paean to baseball, a compact-disk of original jazz compositions aptly titled “National Pastime.”

The union was preordained, Glenn said. Modern baseball is America’s national game; jazz is our indigenous art form. Both have shaped Glenn since he was a kid growing up in Kansas City, Mo. There he lived and died with the fortunes of the Kansas City Athletics, the team with a white elephant for a mascot, the club that traded Roger Maris to the Yankees. There he listened to his father play jazz piano when he wasn’t working as an executive for Yellow Transit Freight Lines.

“My dad was self-taught, but he knew hundreds of tunes,” Glenn said. “He kept lists of all the songs he expected me to play. He must have been trying to dissuade me.”

The strategy failed. Armed with a bachelor of music degree in trombone performance at North Texas State University, Glenn proclaimed that he was “put on the planet to create music.” His announcement came after his father had joked that Glenn ought to go into plumbing, that he was already handy with pipes.

“When I put my plan to him that way, he was fine with it,” Glenn recalled. “He just wanted me to be aware that there was a downside — making a living at music.”

These days — fields of dreams mid-summer, baseball in full flower,

Glenn’s CD circulating around the country — the Whitman educator sees only an upside. “National Pastime,” in fact, was only a side project that he hatched while working on a major symphonic work, “Valley of Streams,” commissioned by the Walla Walla Symphony.

It was the spring of 2006, a sabbatical leave for Glenn. Before sequestering himself in his studio at Whitman, he took a month off to “clear the deck.” Instead of visiting Alaska, which he’d done to start a previous sabbatical, he decided to book a bushel of baseball games — 19 of them in 20 days in six different ballparks. The odyssey began at Coors Field in Denver and ended at the Metrodome in Minneapolis. Glenn kept score of every game, never realizing that another score — a kind of jazz suite — was blooming in his imagination.

“My first thought was to keep a journal of the trip. I started one, but it was too onerous,” Glenn allowed. “I just wanted to watch and record the games.”

He did, but other thoughts floated to the surface like answers in a Magic 8-ball. Back in Walla Walla, Glenn wrote two tunes at his first opportunity and tested them at summer jazz camps that typically occupy his summers. A recording — in New York with first-call players with whom he worked in the 11 years that he lived there — was always in the back of his mind. But other responsibilities, including “Valley of Streams,” stymied him.

“I screwed up by procrastinating,” Glenn said, his voice knotting up. “It took his death for me to realize that you can’t put things off that are closest to your heart.”

“To be able to combine teaching and my own creative work is rare and wonderful.”

“National Pastime” is dedicated to Irwin, an impeccable soloist and gentle man who in all the years that Glenn shared an apartment with him “couldn’t even kill a cockroach in our kitchen.” The CD ranges from the bright, jaunty title tune with its Latin bridge to the tender, balladic “Roberto Clemente Bridge” to “Blues for Buck O’Neil,” a loping blues dedicated to John Jordan “Buck” O’Neil, who dominated the Negro Leagues and managed the Kansas City Monarchs.

Between Whitman and his cocurricular world of composing and performing, Glenn considers himself blessed. “To be able to combine teaching and my own creative work is rare and wonderful,” he said. “As a jazz trombone player, even with a degree in theory and composition, the chance to write for an orchestra would be rare in a big city.”

The list of jazz musicians who’ve doubled as jazz educators is long: Max Roach at the University of Massachusetts at Amherst, Jackie McLean at Wesleyan University, Stan Getz at Stanford University.

For his part, Glenn has enjoyed a double-life at Whitman since 1989, shortly after he received his master’s degree in music theory and composition from the University of Northern Colorado.

Roach, McLean, Getz and their cohorts all faced a particular challenge, as Glenn does now. Their charge is to teach an art as ineffable as the imagination: improvisation, the sound of surprise.

“How do you teach creativity?” Glenn said. “You can’t really. What you can do is give students the tools to work with, language to speak with — musical language. Learning scales and phrases is like acquiring vocabulary.”

Glenn wouldn’t trade the challenge for anything — not even George Brett’s pine-tar bat.

“Being a jazz trombone player only is a difficult, narrow niche,” he said. “Whitman allowed me to reinvent myself. I’ve rediscovered parts of my nature that got lost when I was operating with a one-track mind.”

For Glenn, the awakening was a lot like baseball, jazz and the Constitution: a thing of beauty.