Timothy Kaufman-Osborn, Baker Ferguson chair of politics and leadership, assumed the office of provost and dean of the faculty of Whitman College, effective July 1. 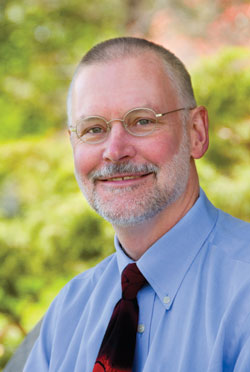 Kaufman-Osborn fills the position vacated by Lori Bettison-Varga, who accepted the presidency of Scripps College in California.

Kaufman-Osborn foresees a smooth transition, relying on the experience he gained during his service as interim dean of the faculty during the 2006-07 academic year.

His first priority is building on the new initiatives brought to Whitman by President George Bridges and by Bettison-Varga in a way that is “consistent with our character and reputation as one of the best small liberal arts and sciences colleges in the nation.”

“I have great confidence in Tim’s ability to serve successfully as Whitman’s chief academic officer,” said Bridges. “His appointment ensures a smooth transition in leadership in the provost and dean’s office.”

Bettison-Varga, who came to Whitman in 2007, said she had no intention of leaving Whitman so soon, but the call to Scripps, her mother’s alma mater, was strong.

“I have the deepest respect for Whitman’s talented and dedicated faculty, staff, students and alumni,” she said. “It has been my privilege to work on your behalf.”