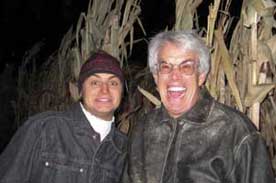 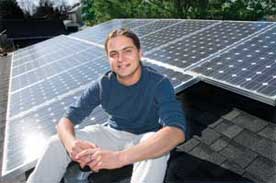 Rokpelnis with rooftop solar panels. Read more about his work as the campus sustainability coordinator here.

You can never get too much of a good thing. At least, not when it comes to having a family away from home, wherever in the world you might be.

Unlike with parents and siblings, both sides have some say in what they will get. I knew my friendship family was going to be great the minute I saw M’Lisse and Charlie Moerks. Charlie had a plastic bag in his hand with sweet cherry tomatoes from the four gigantic plants in the back of their immaculate yard, which dovetailed with my interest in food and gardening.

Karlis Rokpelnis ’09 from Latvia and Neda Ansaari ’10 from India write about the support they have found in friendship (host) families and the International Students and Friends Club.

Similar to me, at the time they were fairly new to the town. Charlie maintains large computer systems over the Internet, so he can work from just about anywhere. After M’Lisse retired from a career in communications and event organizing in Seattle, Walla Walla, her birthplace, was only one of the possible places to settle down.

Over the four years at Whitman, we have become quite familiar, and we have had our share of family drama. Like the time freshman year when, having been invited to stay for the break at the Moerks, I insisted on getting a live Christmas tree from the Blue Mountains. I was puzzled as to why M’Lisse was skeptical about me sticking a few wax candles on the branches. But it worked out, and after a while she agreed to put the fire extinguisher aside, and we could get down to the business of opening the presents.

Not to leave the impression that it’s been holidays and fun alone. I spent a spring break laying patio stones in the back yard with Charlie: It is the best-laid patio in town. You have my word on it.

The learning and support in the friendship-family relationship goes both ways. I have learned apple-pie baking from M’Lisse and fine masonry from Charlie, but I dare to say that the learning was mutual when together we expanded M’Lisse’s repertoire to her now famous sumptuous vegan carrot cake.

A high point in our relationship was when my parents and brother and sister from Latvia came to visit last spring. While I struggled my way through setting up outings and excursions to fit everybody’s fancy, M’Lisse and Charlie hit it off with my folks despite the language barrier.

I have a long history of friendship and host families. I started off with two at the same time, when at age 15, I attended a theater and music boarding school in western Denmark. The weekends alternated between the homes of a never-enough-time-to-do-all-the-exciting-Medieval-history / Third-World-development-documentary / post-modern-art host mom, and another family, where we seemed to spend most of our time drinking coffee late at night and talking about politics, books and libraries.

In high school, at the United World College of the Adriatic in Italy, I “adopted” grandparents. Once a week I walked uphill through a forest to visit an elderly Slovenian couple, who always had something good to say about the world.

After those two great experiences and a couple of years in the company of Charlie and M’Lisse, I didn’t have to think twice when a host family was an option during my semester abroad in Beijing.

Graduation brings a lot of unknowns, and leaving behind friends is not easy, even if great and exciting things lie ahead. Luckily friendships last even over distance and time. It has been possible to stay in touch with all my friendship families, and I don’t expect it to change in any way.

There are a lot of fun things to do after graduation — traveling, work, further studies — one could call it “life.” I am very excited about graduating except for one gnawing fear — something tells me that adults don’t get friendship families. Perhaps growing up is not such a smart idea after all.

In memory of Susanne Kløvgaard Rasmussen, a loving host-mother, deep thinker and the kind of librarian we all deserve to have. 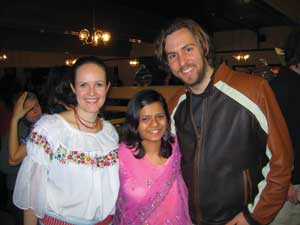 Stepping from the international orientation camp to Whitman campus in the fall of 2007 was a little chaotic and overwhelming.

There was so much going on during orientation week. Before I even realized it, I was surrounded by a lot of sophomores and juniors asking me to sign up for some or the other club. International Students and Friends Club (ISFC) became my comfort zone during that time. I knew almost everyone who was involved, and the best part was the fact that I could easily associate myself with this club and its interests.

It has introduced me to some great people and has given me some amazing friends. I have not only gotten closer to other international students, but I also have made some great friends with different perspectives on the interests we share. ISFC and its activities are strongly associated with my identity and things that I strongly believe in. It provided me with a perfect segue into college. ISFC has been my passion because there is so much that I have been able to do through this club.

ISFC has given me an amazing leadership experience. One of the things I wanted to pursue here was promoting diversity and making people more culturally aware. ISFC has given me a platform for that because this club works toward the goal of bringing the “entire world” to the Whitman campus. The club members are united in sharing their cultures as well as introducing various cultures to the campus and the Walla Walla community through song and dance, speakers, and various entertainment and academic-based events.

The International Banquet, one of the annual events organized by ISFC, has always attracted a good part of the Whitman community. I would not have believed how big this event is until I saw it with my own eyes. It made me realize that the club has a lot of support.

The club has served as a support system for me. It reminds me from time to time that people believe in me and support me in the things I am trying to pursue; not only the club members but also the Whitman community, friendship family and other students. One of the important elements of my identity, being an international student, has been represented through this club, its goals and activities.

ISFC has provided me the means and space to accomplish one of my many goals: to add a new dimension to the assumptions and beliefs expressed by U.S. (domestic) students and faculty members. It reminds me of my presence as an international student on this campus. The club encourages the campus community to think beyond its borders. The experiences that I have had because of my involvement in ISFC have made me more tolerant, organized, competent, patient and understanding. My experiences have made me think outside of the box, placed me out of my comfort zone, and challenged my assumptions and beliefs. It has contributed a lot toward my personal growth.

It has been three years since I first joined ISFC. I have moved from being a member to the co-president. And even today I am enthusiastic about the club and its activities just the way I was when I first joined. The entity of a club comes from its members. The only reason for the success of ISFC is the people who have been involved. And all these people are part of the Whitman community.

In other words, ISFC reflects Whitman and its community; it reflects the amazing support system that we all have here. Leading a diversity club is rigorous and time-consuming, but it is worth it!

Editor’s note: After Neda’s arrival at Whitman her parents moved to Saudi Arabia.