Ryan Crocker ’71, former ambassador to Iraq, spent a day on campus in April talking to history students, above, having lunch with students and visiting his fraternity brothers at Tau Kappa Epsilon. That evening he teamed with Professor David Schmitz to hold a public conversation at Cordiner Hall.

When a towering figure in world diplomacy and foreign relations comes to Whitman College to give a talk, that’s a very special event in the academic year. When he is an alumnus who also spends a full day on campus, sharing his expertise in classrooms and fora, that’s extraordinary.

Whitman experienced such a momentous day in April when Ryan Crocker ’71, recently retired U.S. ambassador to Iraq and Presidential Medal of Honor winner, returned home to campus, to the place he said develops critical and creative thinkers and “did so much to shape my life and my career.”

Crocker teamed with Professor David Schmitz, Robert Allen Skotheim chair of history, to hold a public conversation in Cordiner Hall titled “The events for which the Iraq war will be remembered have not yet happened.” 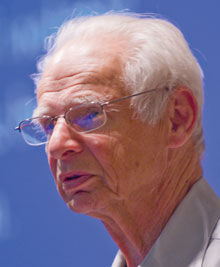 Ayaan Hirsi Ali, author of “Infidel” and “The Caged Virgin” and a prominent critic of Islam, lectured at Cordiner Hall.

Other spring lectures included: the Rempel Lecture by Harry Greene, professor of ecology and evolutionary biology at Cornell University, who discussed “Pleistocene Rewilding,” the theory that suggests that the loss of most of North America’s large vertebrate species needs to be reversed. He believes the restocking needs to happen on the continent to avoid the extinction of other species, changes in ecosystems and an altered evolutionary course.

“Love Canal 30 years later: What have we learned and where do we go from here?” was presented by Lois Gibbs, executive director, Center for Health, Environment and Justice.

And Jamillah Karim, author of “American Muslim Women: Negotiating Race, Class and Gender within the Ummah,” gave a lecture titled “Behind the Veil: A Muslim Feminist.”