As program director for Laboratory Directed Research and Development (LDRD) at Los Alamos National Laboratory, William “Bill” Priedhorsky ’73 is immersed in the “most forward-looking, most productive, most creative science” of his 31-year career at the laboratory. 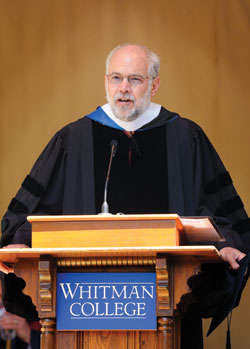 “Just for fun,” Priedhorsky sent along this photo of himself receiving his degree in 1973. He notes other Los Alamos-Whitman connections. Dave Scudder ’73 just retired; Dave Thorn ’73 is a chemistry group leader and former deputy associate director; Duncan McBranch ’85 is deputy principal associate director, which makes him Priedhorsky’s deputy boss.

Since he joined the Los Alamos laboratory in 1978, his research has spanned the gamut from instruments for X-ray astronomy to technologies to stymie the spread of weapons of mass destruction. He has earned numerous awards for distinguished performance in his career, including in 1997, when at age 44, he was among the youngest scientists to be named a Los Alamos National Laboratory Fellow.

In May 2009 he earned another coveted form of recognition: an honorary doctor of humane letters from Whitman College.

“I was both surprised and honored when President Bridges called,” Priedhorsky said. “This is not an experience that comes to many scientists.”

Priedhorsky’s assignments at Los Alamos have included work in the Astrophysics and Radiation Measurements Group and as chief scientist of Los Alamos’ Nonproliferation and International Security Division, then the International, Space and Response Division and the Threat Reduction Directorate.

All of which led to what he calls “the best job I’ve had so far.” Laboratory Directed Research and Development is the “premier research program at the lab.” With a $127 million budget and a directive from Congress to determine its own future, programming for LDRD is a little bit “like running a venture capital fund,” Priedhorsky said. “It’s the center for strategic planning and investment” for the larger lab.

“America is currently facing energy, security and environmental challenges that, in their scope and complexity, are perhaps unparalleled in the nation’s history,” Priedhorsky wrote in a message on the Los Alamos Web site. “The national laboratories are being called on to provide the scientific breakthroughs that will be needed to develop long-term solutions.”

In his current role, he is “engaged with scientists from all areas of Los Alamos, from biology to cosmology and everything in between” to support the research that ultimately may result in these breakthroughs.

Communication is the most important skill he employs today, he said. “Reading and writing, to be able to articulately defend the program, to share in its excitement and clearly develop plans for the laboratory” are key responsibilities. The ability to explain the science and the vision to people inside and outside the laboratory is crucial. “Science and technology have an almost unlimited potential for bettering the human condition, but our ability to realize that vision is hurt by the limited communications skills of most technical experts,” Priedhorsky said. Except, of course, for those who spent their undergraduate years at Whitman.

Priedhorsky, a National Merit Scholar, arrived at Whitman already on his way to becoming a scientist. He found people “enthusiastic about every field of endeavor.” Yet despite the “broad intellectual inventory,” it also was “a place where you could move freely; you could easily connect with the sociologist, artist or math professor, within the balance of a small campus.”

He found professors willing to be challenged. One of his strongest memories is of an anthropology professor who, when Priedhorsky questioned him in the middle of his lecture about the basis for conclusions about how a culture functioned, “rolled up his sleeves and spent the whole rest of the period telling us how anthropologists do their job.”

The young student, 16 years old his first year, “could have been lost in a bigger environment,” he said. “The mix of people was challenging … we had a class full of characters.”

As he reflects on those years, he realizes that while he has felt a tie to the faculty — “so important to our earlier lives, for what they taught us in the class and out” — many of them have now retired. “You lose that connection,” he said.

The result, for him, has been an even stronger tie to classmates. He looks forward to reunions where “there are a lot of friends yet to be made.”

Priedhorsky also believes in the importance of connecting to future generations of Whitman students. Alumni are “in a special position to understand the good that Whitman does. Who in the world can really understand that good better than those of us who have been there?”