Dr. Richard “Dick” Simon Jr.’s offices in Walla Walla are quiet as a cave. If the walls could talk they’d probably whisper.

Sometimes patients must spend the night there, in rooms styled like hotel rooms, so that Simon ’72, a renowned sleep disorders expert, can collect computer-generated data to diagnose the patient’s problem. Inadequate sleep is far more than simply frustrating; there actually are grave health risks, said Simon, who was featured on an HBO documentary “Wide Awake” and is involved in national research and lectures on the subject around the nation. 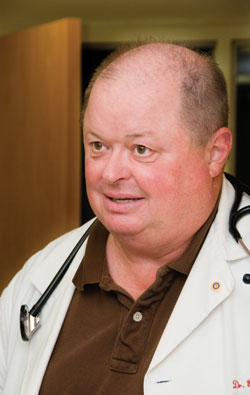 He’s devoted to helping as many patients as he can at the Kathryn Severyns Dement Sleep Disorders Center — 7,000 so far — and spreading the word to the public and to primary care physicians not always educated about sleep disorders.

“I’m usually reading about sleep, thinking about sleep,” said Simon, who is intensely interested in his work. And he makes sure he gets enough sleep.

Sleep deprivation and sleep disorders “don’t cause everything that’s bad — just most of them,” Simon said.

They are at the root of many health problems and public safety concerns, he said. In the category of sleep deprivation, he can tick off countless major industrial accidents caused by operators with too little sleep. And it causes a third of the country’s vehicular accidents.

One of the most common sleep disorders is sleep apnea. Nine percent of women and 25 percent of men in the United States, many of them overweight, have at least a mild form of it, but most are undiagnosed. Sleep apnea increases the risk for high blood pressure, heart attack, stroke, obesity and diabetes, according to the National Heart Lung and Blood Institute.

Simon explained that sleep apnea causes people to stop breathing repeatedly when the body’s muscle tone relaxes during sleep and the back of the throat closes, obstructing the airway. When breathing stops, blood-oxygen levels and blood pressure fall, and the heart rate slows. The brain signals for a surge of adrenaline that disrupts sleep, and it can take a couple of heartbeats before the regular rhythm can resume. And as this process happens over and over, there is damage to the heart, pressure on the lungs, and so on — and ventricular fibrillation or other serious reactions can occur.

Simon wasn’t always focused on sleep. He was an internist in mid-career about ready to dial down his busy medical practice and play some golf when a chance meeting in 1992 with sleep disorders expert Dr. William “Bill” Dement of Stanford University School of Medicine changed his plans.

Dement’s early lab work resulted in the later discovery of REM (rapid eye movement) sleep, the medical world’s first understanding that sleep isn’t like death, that the brain is actually more active than when a person is awake. Dement was in Walla Walla to visit his mother (Kathryn Severyns Dement), and was driving through town when he decided to pull into a medical facility and ask if any doctors were interested in learning about sleep medicine. Dement had an ongoing concern about primary care doctors’ lack of knowledge about the health risks of sleep disorders.

It was because of Dement’s distinguished reputation that Simon agreed to hear him out even though, “Frankly, I didn’t believe him at first,” he said. But the facts, and finding patients in his medical practice with sleep apnea, won out.

“Simon was the first primary care physician in the country to jump on this in a big way,” said Dement, who at Stanford established the nation’s first sleep disorder clinic. From this control room in the Kathryn Severyns Dement Sleep Disorders Center at Providence St. Mary Medical Center in Walla Walla, Dr. Simon can monitor patients being tested for sleep disorders in hotel-like (photo below) rooms located in the center.

Simon would eventually join forces with Dement and Dr. German Nino-Murcia, founder of the Sleep Medicine and Neuroscience Institute in Palo Alto, Calif., to train primary care physicians on how to diagnose and treat sleep disorders. Simon’s sleep center, Harvard University’s center and three others recently were selected to participate in a $14 million study funded by the National Institutes of Health and the National Heart Lung and Blood Institute to examine the effectiveness of a treatment for sleep apnea.

“Sleep is the basis for all life.”

Simon, son of longtime Walla Walla pediatrician Dr. Richard Simon Sr., has a chemistry degree from Whitman College. He chose Whitman in part because so many people he admired went there. He met another chemistry major there who would become his wife. Deberah Samples Simon ’72 is a senior lecturer of chemistry at Whitman.

Simon Jr. went on to the University of Chicago’s medical school in the late 1970s, then served as the University of Chicago Hospital and Clinic’s chief resident and instructor in medicine. Eventually, not wanting to raise a family in Chicago, the Simons returned to Walla Walla, where he established an internal-medicine practice and later devoted much time to caring for HIV/AIDS patients, the first doctor in town to do so. In 1996, the Washington State Association for Supervision and Curriculum Development recognized him for his work in developing an AIDS curriculum for the Walla Walla School District.

Then his medical path changed.

“Sleep comes up often in any conversation that you enter into with Dad,” says son Michael Simon ’02, who has a music degree from Whitman and now plays with the Boston-based band, Stepanian. It happens even when his father talks sports — another passionate subject. (His father contends that, besides some past “bad general manager decisions,” the reason the “Mariners will never win a pennant is the amount of sleep they lose with all of the traveling to and from the remote Pacific Northwest,” Michael said.) 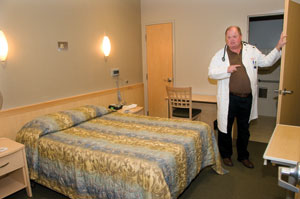 Dick Simon is a rapid-fire conversationalist about sleep and baseball, but he will brake for great music. When he realized during the interview his office stereo was whispering Tchaikovsky’s “Fourth Symphony,” he fell silent for a few seconds so he could breathe it in. Simon has jazz musicians’ pictures in two examining rooms, and once considered being a professional musician. He plays the saxophone and clarinet, and is the chief governance officer for the Walla Walla Symphony, for which he also occasionally plays bass clarinet and bassoon. But he walks his sleep talk, getting in a nap if the symphony has a late-night performance.

While his musician friends may get his message about the importance of sleep, not all medical school faculty members do, Simon said. Many schools don’t have sleep medicine in the curricula, and the seriousness of sleep disorders still isn’t widely known among family doctors across the country. So the mission continues: Simon organizes and teaches major seminars and so far has reached about 2,700 primary care doctors.

There are four essential components to a healthy life in Simon’s view: Three of them are nutrition, regular exercise and an appreciation of the arts, which he believes helps people through life’s tough times.

The fourth — and most important — is sleep. “Sleep is the basis for all life,” Simon said. Patients he has treated through the years report dramatic changes. They feel great, are more alert, and experience improvements in mental health, blood pressure and other physical problems.

“They have their lives back.”