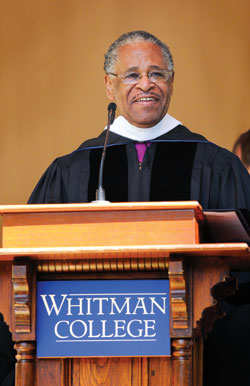 Elected a bishop of the Christian Methodist Episcopal Church in 1982, Othal Hawthorne Lakey ’57 is the presiding prelate of the Sixth Episcopal District and a nationally known preacher, lecturer and author.

After earning a history degree at Whitman, he went on to earn two master’s degrees — one in divinity, one in theology — and three honorary degrees. Whitman bestowed a fourth honorary degree — a doctor of humane letters — at Commencement in May.

Lakey attributes his success in theological and graduate school to his academic preparation at Whitman. “My study of history, my major, and philosophy, my minor, put me in a position to grasp the most rigorous systematic theological curricula,” he said. His experience on the debate team “developed public speaking skills that served me ever so well not only in my preaching but as a spokesperson for communities, and participation in public forums throughout the nation and parts of the world.

“The several books I have been able to publish I attribute to the things I learned at Whitman.”

There also were lessons to be learned as the only African American student on campus for a time.

“The engagement with all-Caucasian faculty, schoolmates and administration prepared me well for interaction with other racial groups as I became active in the Civil Rights Movement in the South in the 1960s and 1970s.

“To be thusly remembered re-enforces my fond thoughts of Whitman as truly a caring institution.”

His ministry in the Christian Methodist Episcopal Church began at age 12, when he was licensed to preach, and he was assigned his first church at age 18. He has pastored churches from Portland, Ore., to Shreveport, La. In addition to his current role as a bishop in the CME Church, Lakey also serves as the chair of both the Department of Christian Education and the Commission on History and Archives. He has served as editor of the “Christian Index,” the official publication of the church, and appears regularly on “The American Religious Town Hall,” a nationally syndicated television program.

Receiving this honor from Whitman is “beyond my wildest dreams,” Lakey said. “Though Whitman has been treasured in my heart, my ministry has been in the church among African Americans, and I have not had the constant relationship with my alma mater and classmates. To be thusly remembered re-enforces my fond thoughts of Whitman as truly a caring institution.”

That caring is at the core of one of Lakey’s favorite Whitman memories: In September 1954, he walked into the admission office “literally off the street” and said he wanted to transfer from Pepperdine University to Whitman but had no money. He was sent to the office of Pete Reid ’49, who “allowed me to be admitted immediately by signing a promissory note that was not due until the following spring!” Lakey said.

He also remembers the day three years later when he accepted his diploma at Commencement. “I was the first in my family to receive a college degree, and the pride my mother had along with the joy of the young lady who would become my wife a year later gave to me a treasure beyond compare.”

“I walked into the building behind me (Memorial) 55 years ago with the opportunity to matriculate at Whitman and to leave these sacred grounds and go forward with the ability to serve my people, my country and my church.”

Fifty-two years later that pride was equally evident as Lakey stood on the Whitman stage once again.

“I walked into the building behind me (Memorial) 55 years ago with the opportunity to matriculate at Whitman and to leave these sacred grounds and go forward with the ability to serve my people, my country and my church,” Lakey said as he received his honorary doctorate. “With what you have done for me, I have been able to go forth and do for others,” he said.

In an earlier interview, Lakey noted that, “Connections with one’s past are vital for one’s present and indeed for one’s future. At every opportunity, even as I sit on the board of other academic institutions, I hold up Whitman as the ideal of a liberal arts college.

“I still have a certain pride and tingle in my heart when I have an opportunity to say, ‘I graduated from Whitman College in Walla Walla, Washington!’