Caitlin, Kristan, and Lisa promoting their show in Toronto. 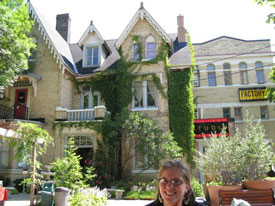 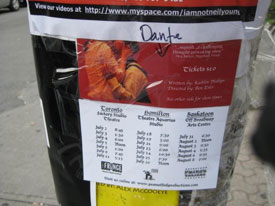 One of our posters covered over by another show 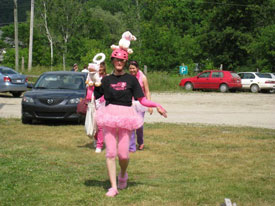 The Wakefield parade to celebrate the festival 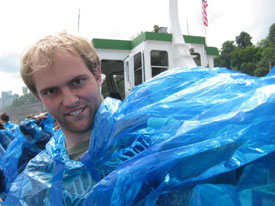 Immediately after leaving the country this summer, I drove past a man wearing a gray “one-sie” and holding what appeared to be a chainsaw (I kid you not).

“Oh Canada,” I thought to myself, “You are going to be a bumpy ride.”

In the summer of 2009, I spent two months performing in different theater festivals on the Canadian Fringe circuit, and I can safely say that it was indeed a bumpy ride.

Kristan Kelly Brown ’09, Forrest Seamons ’08 and I performed “Dante,” an original work written by Kaitlin Phillips ’08. Fringe festivals, generally composed of low-budget, original works of performance art, are a great way to showcase original works in a professional setting without having to find a producer for your show. Fringe theater is appealing in part due to its edginess, the community of performers involved and the numerous opportunities to perform a show that may not otherwise get produced.

On the Canadian Fringe, I saw more than 30 shows ranging from aerial dance, Lecoq-style mime, stilt shows, stand-up comedy streamed live over Twitter, shows with puppets, interesting sex positions and political slander. Performers at the Canadian Fringe are mostly from Canada, but I encountered performers from Australia, the United Kingdom, France and the United States as well. Us foreigners had to work especially hard at promoting our shows, and thus my time on the Fringe taught me a great deal about promoting myself as a performer. Through these shameless self-promotions, I formed relationships with other artists whom I would definitely never have met otherwise. The community between artists on the Fringe is generally very strong.

I valued being able to perform in a number of different venues. We performed in multiple professional theaters (one in which the air conditioning unit shot shards of ice at me while I was waiting backstage), and also in a pub where a drunken man in the back had quite a bit to say to us while we were performing.

What I loved the most about this experience was the openness of the communities we performed in. People opened their homes for us to stay in without knowing anything about us. Also, the Fringe is run by volunteers, many who are not otherwise involved in theater. Wakefield, a tiny town in Quebec, threw a party that included a parade to celebrate the actors who came to their festival. In Ottawa, our hostess welcomed us when we arrived at 2 a.m. by saying: “Oh my God I’m glad you’re here! Don’t mind the Irish man on the floor; I have no idea who he is.” She was just that hospitable.

All in all, if you have a piece of performance art you are passionate about, I strongly urge you to take it to the Canadian Fringe Festival. It’s a ride that I’m extremely grateful I was able to take.