Withycombe named a Professor of the Year 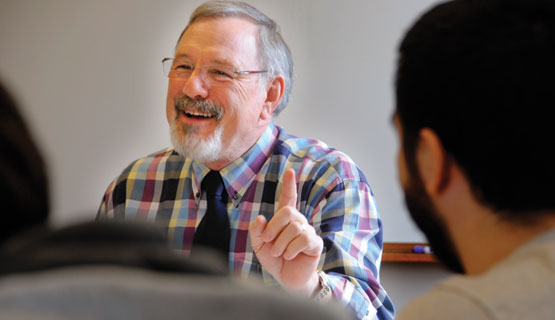 Bob Withycombe’s former students say he is a generous and dedicated teacher, a mentor and friend.

His students say he changes lives. He says that’s what teachers do.

“Everyone who teaches has to begin with the assumption that they have the ability to change lives. I’m just fortunate to have a whole lot of successful former students who confirm I’ve been able to do that,” said Bob Withycombe, professor of rhetoric and film studies.

A modest comment, considering that Withycombe, a 29-year veteran Whitman teacher and former debate coach, recently was recognized as the 2009 Washington Professor of the Year. As pleased as he is that the award brings much-deserved attention to Whitman, he is equally shy about the praise heaped on him by colleagues and former students.

“He is without a doubt, the best teacher I’ve ever seen or had the pleasure of working with.”
— Robert Sickels
associate professor of rhetoric and film studies

The U.S. Professors of the Year program, sponsored by the Carnegie Foundation for the Advancement of Teaching and the Council for Advancement and Support of Education (CASE), salutes extraordinary dedication to teaching as illustrated by involvement with students, scholarly approach to teaching and learning, contribution to education at the institution, and support from colleagues and current and former students. Only 38 such teachers were selected from across the country for the 2009 award.

It is no surprise to Withycombe’s colleagues or his students that he drew national attention for his teaching and professional excellence. He has earned numerous honors at Whitman, including the annual Alumni Association Faculty Award for Service in 2009, the Town-Gown Award for Community Service in 2002 and the Thomas D. Howells Award for Distinguished Teaching in Humanities in 2000. He was named a Paul Garrett Fellow in 1991.

But this is the first national award he’s received, and in his familiar, self-deprecating style, Withycombe noted that such an event is a little like winning the lottery — or being struck by lightning.

He is proud, shocked, humbled and just a little embarrassed to be singled out from the talented Whitman faculty. “Whitman has put together a list of very fine teaching faculty over the years to be nominated for this award, and that’s really as far as I need to go. At a place like Whitman there is a sense that we are all members of a supporting cast, and I’m very pleased (and most comfortable) to be a part of that supporting cast,” Withycombe said.

Lindsey Gehrig ’05 sees it more like the Carnegie Foundation and CASE. “Professor Withycombe embodies the ideals central to Whitman’s mission of providing an exceptional college experience.” His commitment to teaching, service and scholarship is blind to conventional distinctions between classroom, campus and community, she said.

Thomas Miller ’07 agreed. “Bob is an exceptionally generous and dedicated teacher, mentor and friend. It is no exaggeration to say that he has made an extraordinary impact on my intellectual and personal development.”

“Yes, these students are talented in their own right, but everyone needs someone to help them reach their full potential, and in many cases that person is Bob Withycombe,” said Robert Sickels, associate professor of rhetoric and film studies.

“He is without a doubt, the best teacher I’ve ever seen or had the pleasure of working with,” Sickels said. “He has an ease about him that results in students feeling very comfortable in his classroom. They freely contribute to discussions, seemingly with neither trepidation nor fear. This results in some incredibly in-depth, informed and free-ranging discussions,” he said.

Indeed, one of Withycombe’s “unique talents is to both challenge students and put them at ease enough to take the risk of making an argument,” Miller said. 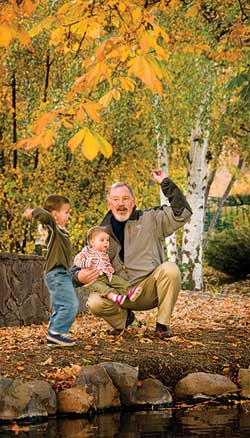 Withycombe arrived at Whitman in 1980, fresh from a nine-year career as a high school teacher and forensics coach, with the mission to transform Whitman’s speech and debate team from a small, regional success to a nationally ranked team.

He accomplished that mission, and more, said Whitman President George Bridges. “Bob has elevated the debate program to national prominence and successfully mentored hundreds of Whitman students — many of whom he continues to advise long after graduation. And he served as an administrator overseeing college advising and academic programs. In my 30 years as a professor and administrator, I have never met an individual who contributes more in the classroom and for the campus community than Bob does,” Bridges said.

Part of what Withycombe brings to the Whitman community is his passion for the subjects he teaches and his joy in sharing them with students of all ages — whether it’s the course “Freedom of Speech and the First Amendment” for college students on the Whitman campus or a field trip focused on the rhetoric of the founding fathers for alumni learners visiting historic Philadelphia.

Of the courses he teaches now, “Freedom of Speech and the First Amendment” is probably his favorite. “I don’t think people understand the Supreme Court — it’s the least understood branch of government and few know who the justices are or what they do, and it gives me the opportunity to really introduce students to one of the central players in politics.”

Another favorite is “Background of African American Protest Rhetoric.” He said, “It’s hard to understand the 20th century and perhaps the 21st without understanding the central issue of race in America. The Obama election only highlights the extremes — from enthusiasm and sheer joy to contempt and vilification.” Some of the current backlash against Obama, for instance, “springs from a very deep well of racial anxiety.”

He particularly enjoys teaching these courses because they deal with topics that are ever-changing, as is his course content. Ongoing dialogue with former students often helps inform his current classes. After teaching “American Public Address” with a section devoted to inaugural addresses, former students who now work in Sen. Harry Reid’s office secured inauguration tickets for Withycombe. Other former students provided housing for his trip in January 2009 to observe the event in Washington, D.C.

“Together, we all added new content and insights for the course,” he said.

Whitman professors collectively earned the No. 9 ranking in the nation in The Princeton Review’s 2009 guide, “The Best 371 Colleges.” For this and other national rankings in 2009, see:

Withycombe’s welcoming and thoughtful approach in his teaching and his work with colleagues, students, alumni and college staff exemplify the qualities the U.S. Professors of the Year program seeks to celebrate by making excellence in teaching a model to which others can aspire.

“I honestly do not believe that Whitman College would be the fine liberal arts college it is today absent Bob Withycombe’s exemplary leadership as well as his daily acts of service,” said Timothy Kaufman-Osborn, provost and dean of the faculty.

Withycombe is Whitman’s second recipient of the award. Keith Farrington, Laura and Carl Peterson endowed chair of social sciences, received a 1992 Professor of the Year Award.