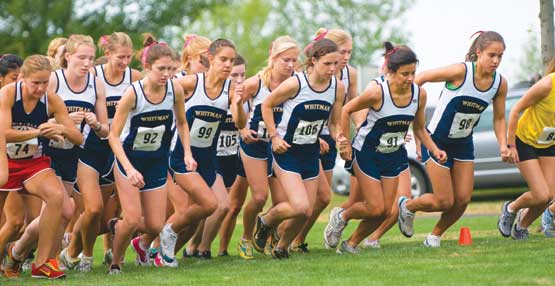 The Whitman women’s cross country team worked its way to a second-place finish in the NCAA West Region meet and a trip to the NCAA Division III championships this year.

“This was one of the tightest and deepest fields I’ve ever seen at a national championship event. It came down to a matter of just a few seconds for every place and every team point.”

“This was a very emotional race for our team,” he noted. “Our seniors in particular have worked so hard in recent years to get our whole team qualified for nationals. They were thrilled to be running and competing today, and when it was all over, they were just overwhelmed by it all.”

In October, the women’s team placed a close second at the NWC Championships, while a young men’s team placed a strong fourth, the best men’s finish since 1994. For the women, Ballinger, Colis, McCune, O’Moore and Corcorran won all-conference honors, as did Cory Rand ’13 for the men.